There’s only been one such game in Major League Baseball history where a full game, counted on the record, was played in front of an empty stadium with no paying fans.

That game occurred five years ago to this day and included the Chicago White Sox against the host Baltimore Orioles. Baltimore was aflame metaphorically (and literally in some specific spots) as citizens in the city protested and acted out against law enforcement. Members of the BPD had not been published for acts that led directly to the death of Freddie Gray earlier that month and it looked to be another situation where police officers would be let off the hook completely after causing the death of an unarmed black person.

MLB, the Orioles and the Sox basically side-stepped the thorniest parts of the controversy they managed to stumble into by simply scheduling their games at the wrong time. After choosing to postpone games earlier in the week, the teams and the league chose to make the risky decision to play this historic contest on April 29, 2015.

The day before the empty stadium game, I wrote the post below in which I backed up the decision to not play a game which would indirectly put on a facade of peace and regularity during a time where neither quality was being afforded to the city of the Baltimore and its residents.

Playing as they did, in front of the empty seats with every single noise from the game amplified against the nothingness surrounding it, managed to uphold the sanctity (whether earned or not) of baseball while also making a kind of eerie statement supporting my argument that things aren’t right and they won’t be for the time being and that actions need to be taken outside the ballpark as much as they need to be taken inside it.

Sounds familiar? As the MLB tests the waters on an idea to play out at least some of its upcoming summer with games that will match the Orioles and Sox in lack of atmosphere, we’re confronted with similar questions and conflicts and a similar, compromised way out motivated by both a love of the game and a need to not have to always face the darkness that we can’t seem to shake.

What’s it like to play in a Major League Baseball game without any fans? These guys know (northjersey.com)

As reports of inflamed protest and increasing confrontations between residents of Baltimore and local law enforcement increased throughout Monday afternoon, we once again saw one of those routine instances where society and sports intersect.

As it often is, and in many ways should be, sports gets left in the dust after getting ran over by society. An easy-to-be-rescheduled regular season contest between the Chicago White Sox and the Baltimore Orioles was rescheduled within the past hour. 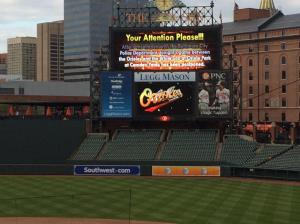 In no way did it seem to make sense to play a game at Camden Yards, square in the urban center of a thoroughly distressed metropolitan area, during another Monday night where we see a segment of America working through the brutal play-act of misery brought on by one more black person dying unreasonably at the hands of law enforcement.

Freddie Gray was buried today, the routine snuffing of his life — started by violent acts on April 12 by Baltimore police that led to his spine being severed — brought about the protest and brought about the misunderstandings which are playing out so tragically real in that mid-Atlantic city now and it extends minstrel-like digitally throughout the rest of our nation as this continues to play out.

Some will even drag this minor inconvenience of a canceled game into it, maybe using the fact that they can’t unwind with a leisurely 9 innings from their favorite ball club as a example of an criminal waste of effort and an inherent disrespect of values by people who refuse to play by the rules of society.

There’s a line that separates those who choose to fight for the respect of black life in this country against those who’d rather champion the rights of property to not be destroyed in protest or the right of institutions to not be approached in anger regardless of what perceived abuses said institutions continue to levy at a discerned segment of our nation.

That’s a reality, that’s tough to deal with while occupying time staring at battery-powered LED screens, but its nothing like what it feels like to be on the front lines, unable to escape in a burning community as clouded with smoke literally as it is figuratively filled with morals and answers that shade grey. Nothing will be settled tonight in the streets of Baltimore, it should be the same in the ball park that represents that city.