Ryan Bukowiecki covers the Bears for WARR; This is the latest in of our series of positional breakdowns of the Bears heading into the 2018 season, check out Ryan’s previous breakdown of the Bears’ tight ends.

After an extended and mostly bewildering rookie contract dispute, the Bears roster was finally made whole on Monday as they announced contract terms were met with Roquan Smith and his agency, CAA.

The No. 8 pick in the 2018 Draft went down as the 32nd pick out of the first rounders to debut in training camp — a conspicuous way for the Bears to begin relations with one of the best new talents in the NFL, but still it was huge news and a relief for fans.

Smith is now at practice and his chances of being a starter for Week 1 have gone from worrisome and unlikely to a definite possibility. The signing instantly helps the Bears defense by slotting a star player next to Danny Trevathan at inside linebacker.

Finally set for 2018, the Bears’ linebacker corps is now ready for a little examination. Lets take a look at this position’s outlook from inside and out heading into the season.

The two linebacking positions seem to have very different outlooks for the season. Inside, the backers should be the strength of the entire unit, the addition of Smith boosts up the overall talent to the group and makes for an interesting mix. 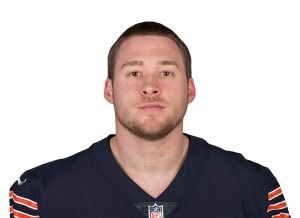 First off, the biggest question from the inside linebackers is can they stay healthy? So far it looks like the top four guys are Smith, Trevathan, Nick Kwiatkoski and, since he was a 2018 draft pick, Joel Iyiegbuniwe. John Timu and Jonathan Anderson are fighting to make the roster but its likely the Bears only keep four inside linebackers, five at most. Trevathan and Kwiatkoski have dealt with multiple injuries in the past and Smith is trying to get up to speed for the season but if this group can stay on the field then they should perform as advertised.

So tantalizing is the athleticism and speed between Trevathan and Smith. Those two can change the Bears defense if we see them a lot this year, potentially working well off each other with their slightly different skill sets. Both are athletic but Trevathan is more of a physical player with his size and the speed of Smith should be unmatched by any of the inside linebackers. Defensive coordinator Vic Fangio can do multiple things with those two in the middle and having Kwiatkoski as a rotating piece certainly helps.

Kwiatkoski is a solid, instinctual linebacker that may start early in the season if Smith is not ready yet. Kwiatkoski looks like the perfect type of backup player, a borderline starter that has experience with three off-seasons in Fangio’s scheme. Overall, this group looks really good on paper. Now its all about getting Roquan ready for the season and if he can make the impact that an eighth pick in the draft can have. If Smith does develop then the Bears are very strong up the middle.

The inside linebackers only issue thus far has been, when will Smith get to camp? With that issue over with now Bears nation can turn its attention to the outside linebackers, who have wallowed in uncertainty.

Traditionally, outside LBs have been the guys that create the most pass rush in a Fangio defense, he does a great job scheming for pressure, but his dominant defense in San Francisco saw constant pressure from a very good front four with everyone else dropping back in coverage. Teams could not score or do much against that defense.

In Chicago, Fangio and his assistants are trying to grow a similarly effective front four here but they need a couple guys to step up and those guys will be Leonard Floyd and the opposite starter on the other side of the line or as he’s more popularly known, To Be Decided.

The opposite starter of Floyd looks like Sam Acho at this point. Acho is a pro but he will not give much in terms of pass rush. Guys like Kylie Fitts, Isaiah Irving and Aaron Lynch, if he makes the team, will be in a rotation to try and add to the outside pass rush.

Some criticism surfaced for the Bears for not finding a book end to Floyd, but there were not a lot of options this past off-season. No team can ever fill all the holes in their roster, but it is worrisome that pass rush may be the biggest hole for the Bears this season. Those are just supplemental issues, though, the spotlight is really on Floyd — the outlook of the outside backers can change significantly if Floyd takes the next step in his development.

Floyd will be in the prime pass rusher position, he has flashed when he is out there and he can make other guys better with how much offenses have to gameplay for his speed. Floyd has also missed a lot of time, so to get more from him the Bears are going to need him more this year than they have in his brief career. No way around it, Floyd is important to the Bears pass rush and he will play the biggest role in its success or lack there of.

Just as it stands on the field week to week, the Bears linebacker corps is right in the middle of the story of the defense going into the season, whether it is how Roquan’s rookie season will come about after the holdout or how much talent and depth the outside linebackers will show us.

Even with all the “turmoil,” the Bears stand to line up their best linebacker group in quite awhile. Smith is an upgrade over Jerrell Freeman, especially seeing as how Freeman was rarely on the field, and the depth at inside linebacker has been and continues to be solid, it may be even better with the drafting of Joel Iyiegbuniwe.

As for outside linebacker, the Bears lost a lot in Willie Young, Lamarr Houston and Pernell McPhee but McPhee is the only one of the three that is currently on an NFL roster.

Clearly, the Bears need to get more youthful talent at the position, but those guys are hard to find. Especially for a team that had so many needs to begin with when the off-season began. The Bears do have some youth and talent at outside linebacker, perhaps it will be enough to be a solid group punctuated by a potential all-pro in Floyd.

This linebacking core is interesting with multiple intriguing pieces to show, it’ll be fun to see if they function and if the Bears can put the pieces together.