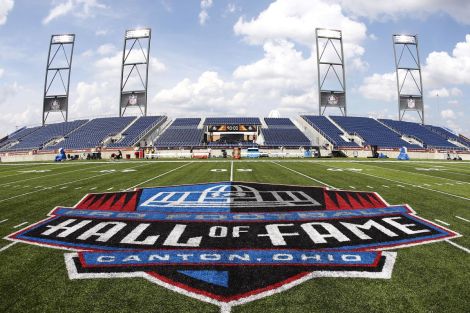 USA Today
Tom Benson Hall of Fame Stadium in Canton, Ohio, the setting each year of the NFL Hall of Fame Game.

The day has finally come — football is back, officially.

And with this official return for 2018 the Chicago Bears get to see a peek of what its future will look like as ran by Matt Nagy Getting a peek and not much else is by design for a game like this, neither team is even game planning for each other. Tonight will be all about execution and seeing who can carry themselves worth a damn in the respective uniforms.

Its better than just reading reports on the internet as we have for the past couple weeks.

A majority of the starters are expected to be off for the Bears, including Mitch Trubisky and Jordan Howard. Nagy obviously will want to limit injuries as much as possible but at least for the offense, reps are valuable. Also, this camp has very few roster battles for starting spots to this point.

Maybe the juiciest battle coming into camp was Roquan Smith and Nick Kwiatkoski for the other inside linebacker spot. Unfortunately Smith will not be able to participate since he remains the only unsigned draft pick in the NFL. On a positive note, even without Smith this defense is still a young emerging defense that may be one step away from being great.

Here are some things to keep an eye out for entering the first of Chicago’s five preseason games.

The preseason is really all about the back half of the roster. Starters will run some things but it won’t be the same offense in play as we’ll see in the regular season. The same goes for the defense and special teams.

Fear not, there will be guys on the back half of the roster who will make plays and the more the merrier because that makes the front half that much better. Fans will have to wait to see the big names at a later preseason date but there are still some individual names that deserve your attention from preseason Game 1. Topping the list has to be, in no specific order, Kevin White, Anthony Miller and Adam Shaheen.

The Bears invested first and second round picks for all of their services and if this trio develops then this offense really could be loaded. White and Miller have reportedly made quite a few plays in this year’s camp and Shaheen has the physical attributes to become a versatile tight end that could compliment off-season signee Trey Burton. Those are the main players to watch on offense. On defense, the names to watch are once again the young guys that could matter this year — among them Kylie Fitts, Isaiah Irving and Kevin Toliver II.

Toliver II is an undrafted free agent that has had positive reviews from camp so far. Fitts is considered a potential draft steal with good potential as a pass rusher. Irving is another potential pass rusher option, he was signed as an un-drafted free agent last year. There are a ton of players to watch across the board so hopefully the headlines tomorrow will be about how well a bunch of previously unknown guys played.

One thing about preseason that makes it so hard to project into the regular season is the difference in substitutions. The Bears’ first team is different from its second and third. The entire first team won’t get any reps in this game, only a few lucky players at best. Second team will get the second fewest snaps, look for efficiency by the offense, defense and special teams but also how good they look against another roster.

The second team is very important in the NFL, many teams will be eliminated before we even get close to the playoffs due to injuries. It happens every year, teams just hope that they don’t get too many injuries on one side of the ball or too many injuries at a position group. No one can replace Aaron Rodgers and seemingly Green Bay is eliminated all the times he has gone down to major injury. Therefore, teams will use many guys off their second teams in hopes they can execute well enough to not be a glaring weakness.

How the Bears second team and even the third team looks against competition is something to watch for in figuring out how good the Bears can be. Third team guys are mainly guys that will be cut, for these players its about putting out the best film they can. Its very possible that there may be a guy on the Ravens the Bears will look to sign once cuts are made.

The preseason and especially the Hall of Fame game is not a time to heavily judge and evaluate, leave that to the coaches. The preseason offers little answers if any, the most important thing is staying healthy because after all a preseason game is nothing more than a glorified practice.

A great game tonight would include few mistakes, a full team effort in playing up to competition, and some great performances from individuals that will matter during the regular season. Enjoy tonight’s game and try to not to drink too much Kool-Aid during or afterward.