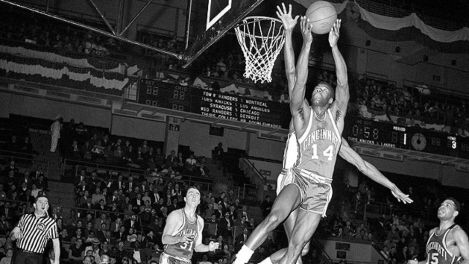 AP Photo/Hans Von Nolde
Oscar Robertson (14) brought an unprecedented level of athleticism to the guard position in the NBA upon his debut in 1960, he followed through as a revolutionary figure both on and off the court through the mid-1970s.

“In The Scope With Joshua M. Hicks” is a weekly column from the Managing Editor of WARR

Shaquille O’Neal tilted the NBA off its axis and left the Magic for the legendary Purple and Gold of the Los Angeles Lakers in 1996.

LeBron James made “The Decision” to leave his home of Cleveland to win titles in Miami with Dwyane Wade and decided to bring Chris Bosh with him to join the festivities in 2010.

In 2016, Kevin Durant left Oklahoma City to join the Golden State powerhouse that completed a 3-1 comeback to beat him in the Western Conference Finals, permanently derailing any potential championship runs in the short term for the Thunder.

As NBA followers we all have varying responses to these league-changing landmark moves, but its clear all of them were historic changes. Each occurred during the NBA off-season time period, each planted a seed that helped the league grow into a year-long phenomenon in which titles can be won as much with efforts in July than in mid-June.

Certainly Shaq, LeBron and Durant deserve their credit for the current “Basketball Never Stops” culture, but so does a more distant name from the past, the man who created the entire field in which NBA free agency took root: “The Big O” himself, Oscar Robertson.

This past Monday, Robertson was recognized with the NBA’s 2018 Lifetime Achievement Award for his efforts on and off the court over the span of his career.

In the process of receiving the award, Robertson also stated responsibilities of the athletes across the world in regards to protesting and supporting the cause against police brutality amongst black and brown males, and ask for white athletes to get involved.

“They’ve seen some injustice in the streets or wherever it might be, it might be almost anywhere, and they’re stepping up. But the only thing that really bothers me is, where are the white athletes when this is happening?” Robertson said in his award speech. “This is not a black athlete problem…I think it’s time for them to say what they want to say about life and about politics and things about the street and whatnot.”

The NBA legend achieved many NBA accomplishments and set many new standards. It would be more than appropriate for the NBA to create a triple-double award named after Robertson for the players that receive the most triple-doubles in the regular seasons seeing as how he finished his career with 181 triple-doubles, 43 triple-doubles more than anyone else in the history of the game (Magic Johnson).

Such an award would be one Russell Westbrook would really appreciate taking home on a consistent basis since he is the current-day triple-double king, heading into the coming season fourth all-time with 104 triple-doubles and holding a streak of back to back seasons averaging a triple-double.

But even though Robertson spent 55 years as the only player in NBA history to average a triple-double over the course of a season, maybe his biggest accomplishment is in shaping how the current NBA operates regarding competition for the talents of athletes across the league.

In 1970, the Robertson vs. The National Basketball Association was a class-action lawsuit that was filed to improve player’s working conditions, and also have a say when they are ready to move on from a team. At the time, Robertson was the National Basketball Players Association President, a role in which he served from 1965 to ’74. The lawsuit took six years before it reached a settlement, at that time the “Robertson Rule” was born.

The “Robertson Rule” was created for players to understand why they are making mega multi-million dollars and the business behind closed doors. More specifically it negated the “option clause” that owners used to keep their key players in their franchise for life, or until the team was no longer interested in keeping the player. With less “options” available to the owners and more available to the players, the tides have turned transactionally, with more leverage available for the players as each new generation enters the league.

Playing and fighting in a Jim Crow era where racial inequality was boisterous, Robertson’s role as a trailblazer for the league and an activist for the African-American man, which today makes up 74 percent of the league’s current state, became more and more clear.

Robertson fought for equality across the league, empowered a generation to make the leap in finding the best ways to compete and add championships to their resumes while also using their voice to promote change in society instead of being silent and sticking to shutting up and dribbling and he still promotes those qualities as he did in his most recent speech.

Owners used to create the power teams. With the freedoms brought forth by the Robertson Rule, players today are creating the power teams and are more in control of their destinies than ever before.

I grew up with fantasies that maybe the best of the best would be able to team up on one squad and often times did trades on NBA Live and 2K to see how it would work, but now such power moves are being enacted right in front of us and the machinations of those moves fills up newsprint, web sites and timelines to the delirious satisfaction of NBA followers world-wide. This would not be happening without the Big O, and for that, I thank you.

On July 1, as we delve deep into another headline-filled free agency period, I plan to celebrate what you started Big O. In fact I am renaming the day as “Big O Day,” another honor to add to the list of overdue actions the league should add to their tab.

One response to “In The Scope: Oscar Robertson Needs More Recognition For Today’s Free Agency Frenzy”