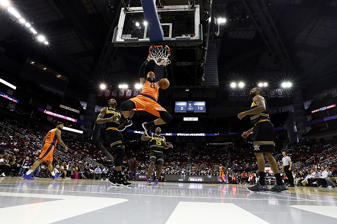 Freddie Willis is a sportswriter, editor and educator based in Houston, Tx.

The BIG3 Basketball League began its second season in Houston with an Opening Night celebration Friday anchored by four exciting games in front of an estimated 16,341 spectators at Toyota Center.

Lots of familiar names from recent decades of the NBA are a part of this league and South Texas was represented well with Houston’s own (Elsik High) Rashard Lewis and Port Arthur native Stephen Jackson as players and Houston’s very own Clyde Drexler, a coach in the BIG3’s first season who currently serves as the league’s commissioner.

Drexler — a champion at the NBA level with the hometown Rockets and the leader of the legendary 1980s-era “Phi Slamma Jamma” University of Houston teams — was recognized by Houston Mayor Sylvester Turner on his 56th birthday with birthday cake and an announcement naming June 22nd as “Clyde Drexler Day” in Houston.

A slew of Houston celebrities and sports luminaries attended the games, including Slim Thug, Bun B, Paul Wall, Scarface, Willie D and Baby Bash alongside basketball Hall of Fame legends Willis Reed and Tracy McGrady. Comedians Jon Stewart and Dave Chappelle, in town for their joint comedy tour, were also in attendance during shoot-around.

One of the goals for the new commissioner is to continue to make sure the fans and player experience is at a high level.

“The professional game of 3-on-3 is the best in the world. The BIG3 League is the best there is in 3-on-3. So to continue to foster that entertainment value, to make sure our players have the best experience as they display their skills.” Drexler said.

Game 1 saw Mahmond Abdul-Rauf hitting the game-winner for 3 Headed Monsters as they defeated Ghost Ballers 50-46. Known for his defense during his playing days, Monsters coach Gary Payton said defense was the key for them in the win.

“Our play on defense was a big key for us,” Payton said. The former Seattle SuperSonics all-star also said the focus was to get back to the playoffs and finish the deal, as the Monsters lost in the championship game last season.

“Our focus is to get to the playoffs and to win the championship.”

Payton’s old school style is exhibited on the court by his trio, it brings back memories for those who were old enough to see him play and it promises the kids who come out to BIG3 games this season can see a more competitive brand of basketball than it may expect.

In Game 2, 3’s Company were led by Andre Emmett, Jason Maxiell and Drew Gooden as their front line dominated Killer 3’s and would jump out to a 26-7 lead at halftime. Killer 3’s were led by Stephen Jackson, Metta World Peace and Alan Anderson, whose 3-pointer would get Killer 3’s to within 13 at 34-21 in the second half. However, Baron Davis would take over for 3’s Company, scoring the final 10 points to seal the win.

Game 3 saw a defensive struggle to begin between the Ball Hogs and Power. Power is coached by Nancy Lieberman, who is the first female to coach a men’s team on a professional level.

Former Boston Celtic champion Glen Davis showed his muscle in the first half, scoring 10 points, along with four points from Corey Maggette, as the Power would boast a 24-16 as it attempted to close out the first half, which concludes as one team reaches 25 points. DeShawn Stevenson led a response that included a three-pointer by Brian Scalabrine, despite all that the Power would still lead by two at halftime (26-24).

The Power would use more outside shooting from the combination of Quentin Richardson and Maggette and would cruise to a 51-31 win.

In the final game of the evening, Trilogy, the league’s defending champions coming off an undefeated 2017 season, came into their match-up against Tri-State a little flat.

Coached by former Detroit Pistons bad boy Rick Mahorn, Trilogy trailed 27-17 at the half to Tri-State, who may be benefiting from roster turnover as much as any BIG3 team this season.

Tri-State was led by David Hawkins with 16 points and Jermaine O’Neal with 10 points, but it was crowd favorite Nate Robinson who would sink the 3-pointer to win it for Tri-State.

Coach Julius Erving gave full credit to his players after the game.

Week 2 of the BIG3 season continues this coming weekend in Chicago. The main contests will take place at the United Center for the first time after playing at UIC Pavilion in 2017. Games will also be broadcast live for the first time on FOX network.

Also to be expected while the league is in town will be the “Young3,” a youth initiative put on by the league in association with Adidas that features skills clinics and a 3-on-3 tournament for kids ages 7-14 that will take place on Thursday at a location to be announced.