Ryan Bukowiecki covers the Chicago Bears and the NFL for WARR, read his previous coverage on the Bears’ 2018 Draft results

Another year and another draft has gone by for the Chicago Bears.

Draft classes exist on a level to create all kinds of knee-jerk reaction from devoted fans to calculating draft analysts. Unfortunately, it is impossible to truly grade a draft in the immediate, especially when we have yet to see any of the players in a Bears uniform.

The general feeling going into the draft was that the Bears really needed to find a way to get three starters, a single first and second round picks allotted to them was to be used to that end with hopefully another starter surfacing from the fourth round on in day three of the selections.

Early on the draft broke the Bears way when they were able to get Roquan Smith in the first round and we noted here on WARR about what an impact player he could be. It would seem that the Bears were encouraged by their first round experience and emboldened to make an impact in the second round too, focusing on the offense twice after gaining a pick that they would use on a player many say could be one of the impact weapons coming out of the class of 2018.

Lets take a deeper dive into the second and third day picks of the Bears picks and offer up a final assessment of their 2018 NFL Draft, because even though the assessment doesn’t mean much now, its always fun in sports to make grand predictions especially when most agree with what your team does.

(Round 2, Pick 39) James Daniels (C) Iowa — Daniels was considered one of if not the top center prospect in the draft, he will fit coach Matt Nagy’s zone run scheme nicely and has an all-around game with few weaknesses. The main concern about Daniels is his knees, some think it could be a problem for him in the league.

It also explains why Daniels fell to where he did since many believed he was a first round pick. Overall, Daniels should be able to come into camp from day one and compete for the starting left guard spot. Perhaps over time he will compete for the center position but for now the Bears want to start him out slowly and take advantage of his versatility.

(Round 2, Pick 51) Anthony Miller (WR) Memphis — Miller had back to back 1,400 yard seasons at Memphis. Not the biggest target, sitting at just under 6-foot and just over 200 pounds but Miller possesses huge hands and has shown the ability to make video game-type catches. Miller also flashes speed, running a 4.48 at his pro day and it shows on game film as well. He may be more quick than fast but he can play in the slot or on the outside.

Miller did not get recruited big time out of high school, he had to earn his way onto Memphis and that chip on his shoulder has never left. Miller wants to prove to everyone in the NFL that he belongs and he should shine in the type of offense coach Nagy wants to run.

(Round 4, Pick 115) Joel “Iggy” Iyiegbuniwe (LB) Western Kentucky — Iggy was an interesting pick in the Bears fourth round. The Hilltopper should be a special teams stud with his combination of size and speed, on defense his best fit is as a inside linebacker. Iggy will have to gain a little weight since he weighs just 229 pounds but he was very active in college, collecting over a hundred career tackles and showing good instincts in finding and getting to the ball.

(Round 5, Pick 145) Billy Nichols (DT) Delaware — Not much is known about Nichols since tape on Delaware isn’t as widely available as other programs. However, Nichols showed off his impressive athleticism at the Senior bowl and Combine. At over 300 pounds and capable of running a 4.90 40, Nichols was used as a three technique his junior year and after a scheme change was used as a run stopper, taking on many double teams in the process. Nichols has shown the ability to play both spots and could be a valuable piece in defensive coordinator Vic Fangio’s versatile scheme.

(Round 6, 181) Kylie Fitts (EDGE) Utah — Fitts is the lone hope out of the Bears draft picks to be a pass rusher opposite Leonard Floyd. Fitts tested really well at the combine and has good speed with good size, his main issue is durability as he missed all but two games in 2016 and missed several games last season due to injury. Fitts is expected to be healthy at the start of camp and some really like Fitts and feel the Bears may have gotten a steal. The former Ute will be used on obvious passing situations this upcoming season at the minimum. 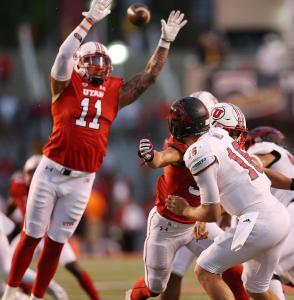 Deseret News
Kylie Fitts (No. 11) showing off his athleticism during the 2016 season in Utah

(Round 7, Pick 224) Javon Wims (WR) Georgia — Wims is an interesting prospect for the Bears, he possesses height and wide catch radius as he measures 6-foot-3.

Wims ran a 4.53 at the combine which isn’t blazing speed but provides the baseline speed needed for the league. What Wims can really bring to the team is rounding out the Bears receiving core. The Bears have the top three of the depth chart figured out with Kevin White in pencil at number four, if Wims can win the fifth spot then the Bears should have some talent and depth at receiver this season.

The Bears had themselves a very productive draft based on how the team looks before and after. There were gaping holes at inside linebacker, offensive line and wide receiver and they were all addressed.

Chicago’s first three picks in the draft filled those gaping holes with players that project to be capable starters or contributors right away. Day three felt like the Bears had reached on some players but if you’re gonna reach, do it in day three. Rounds four through seven are really a crapshoot depending on the draft from year to year. Most general managers are looking for traits that project well within their system at that point.

The Bears should have a special teams stud at the minimum with Iggy. The defensive tackle Nichols is very athletic and could play in both base and sub packages. Fitts could be the draft steal, a player that has really flashed in college but just could not stay healthy. Those injuries pushed Fitts down in the draft but all signs point to him being ready for camp and hopefully that’s when his healthy streak starts.

Finally, adding Wims is a smart pick to add some much needed depth to the receiving group. Wims has the ability to be a redzone threat with his size and be a backup to Kevin White who still cannot be counted on. Time will tell how good this draft ends up being but many “experts” feel like this was a home run of a draft for the Bears.