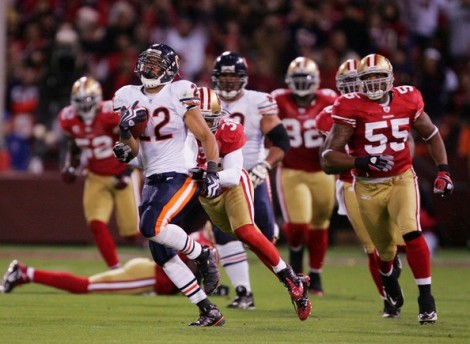 Sidney Brown writes on the Chicago Blackhawks and Chicago sports history for WARR.com

Last week, the retirement of former featured Chicago Bears running back Matt Forte was announced via his Twitter account, ending a stellar nine-year career in the National Football League.

Forte spent the first seven years of his career in Chicago and set himself up to be a beloved member of the lineage of fine running backs the Bears have produced, including the likes of Walter Payton and Gayle Sayers. In response to the success and fandom Forte collected in this city, he’s stated his desire to come back to the franchise for one day so he can retire as a Bear and it looks like that  positive PR move will go down.

This type of ending for Forte as a Bear wasn’t written in the stars. Though Forte looked like a nice physical presence (6-foot-1, 221 lbs) coming out of Tulane in the second round of the 2008 draft, the Bears hadn’t had much luck with consistency from feature backs since Payton’s immediate replacement, Neal Anderson in the late 1980s going into the 90s. Forte changed all that with a modern-friendly hybrid style that allowed him to take contact between the tackles when needed while proving himself to be truly dangerous beyond the hashmarks, catching the ball with skill and having great elusive ability as a runner.

Forte saw the peak of the Lovie Smith era and its end and lasted up until the John Fox era when the team was clearly rebuilding again. In 2015, he shipped out east to the New York Jets with an eye on competing once again before retirement but it wasn’t to be with the dysfunctional Gang Green.

Though Forte only played in one conference championship game in his career and no Super Bowls, he put together a career filled with highlights and numbers that we’re under-appreciated at the time, but with time should stand out more and more as fewer running backs put together seven year spans like Forte did as a Bear. What you see below is exactly why Matt Forte ranks among the best backs and players period to wear a Bears uniform.

Forte had some real highlight seasons during his time on the lakefront. In 2013, Forte rushed for a career-high 1,339 yards with nine touchdowns along with 74 receptions for 594 yards with three touchdowns, all good enough to earn a Pro Bowl berth. In 2014, Forte rushed for a more humble 1,038 yards for six touchdowns but his 102 receptions out of the backfield was the most by a back since Larry Centers did it back in 1995 with the Arizona Cardinals.

Forte’s rookie season (2008) was his second-best rushing season, featuring 1,238 rushing yards for eight touchdowns and 63 receptions for 477 yards with four touchdowns. Some personal records that Forte set include setting a Bears rookie record for rushing attempts in a season (316) in 2008 and receptions by a Bear in a playoff game (10) in the 2010 NFC Championship game against the Green Bay Packers.

That was just a few highlights that stood out front in my mind, but there were plenty more in Forte’s career that fans and media alike may have forgot and or overlooked because of his quiet demeanor. Hopefully some or all of my top Forte highlights during his time in a Bears uniform will jog your memory.

1) 9/7/08 — 50 yard touchdown run in his first game in a 29-13 win at the Indianapolis Colts in front a national audience on Sunday Night Football.

Some fans will have Forte as perhaps the third-best running back in franchise history behind Payton and Sayers while many may have him as the best Bear running back of his generation.

No matter where you put Forte on your list, the fact remains that his impact on the field should be appreciated and respected.