Charles “The Prodigy” Richey is an on-air host and producer for chicagolandsportsradio.com 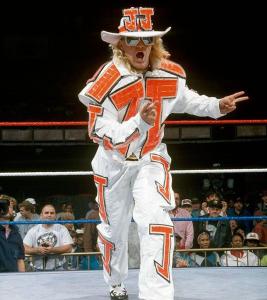 Credit: WWE.com
Jeff Jarrett doing his “Fargo” Strut during his years in the 1990s with the WWE.

We’re getting closer to Wrestlemania Season in the WWE and that momentous time also means its getting close to celebrate another new class entering the World Wrestling Entertainment’s Hall of Fame.

As has been custom in recent years with the WWE HOF, the Hall’s classes are celebrated as part of Wrestlemania weekend in a televised occasion filling up a smaller arena in the city hosting the big event. Announcements slowly revealing each class take place sporadically from January up through the final weeks leading to Mania.

So far our 2018 list of inductees, announced and confirmed by WWE include WCW phenom Goldberg, tag team specialists The Dudley Boyz, and women’s superstar Ivory. Another couple names are expected to be added to the list soon and one controversial name being bandied about is that of the one and only Jeff Jarrett!  (ed. note — Early Monday reports have Jarrett as a 2018 HOF selection, though WWE still hasn’t confirmed)

That’s right, ol’ Double J, as prodigal a son as WWE can claim, could soon be making a celebrated return to the organization.

The four established talents going into the Hall this year all make perfect sense — Goldberg along with his record breaking undefeated run and draws in WCW actually also filled a huge void in the WWE when Stone Cold Steve Austin was forced into retirement in 2003. Even though the former NFL defensive lineman wasn’t a creation of Vince McMahon he was a clear example of one of McMahon’s old sayings in the WWF days, “Larger than life!”

Beyond this year’s headliner, arguably the greatest Tag Team Champions in their era and with the now standard women’s representative you have an Attitude Era favorite and a true performer in Ivory who held multiple titles in a competitive time for the women’s division.

As far as Jarrett goes, he’d certainly add star power to the list but his history hasn’t been the easiest with WWE and McMahon, who still has to welcome you into the fold personally when it comes to making such a comeback as Jarrett stands to make with a Hall of Fame induction.

As many fans remember, Jarrett’s career with the WWE started back in August of 1992 in where he was part of a cross-promotional exchange of talent featuring WWE stars with the featured stars in Memphis, (USWA), long ran by his father Jerry Jarrett, including Jerry “The King” Lawler. Jarrett got a taste of WWE competition and exposure to the fans at a high level, he even was scheduled to take on Bret Hart in a match thatwas delayed due to bad weather conditions. Nevertheless, Jarrett eventually was offered a full-time contract by McMahon and he made his television debut with the company in October of 1993.

Early vignettes would feature Jarrett as an arrogant heel in where he stated that he was going to use the WWF only as a platform to elevate his country music singing career through his wrestling success. During this time period Double J’s notable altercations included him bumping up against then one-half of the Monday Night Raw announce team, Macho Man Randy Savage, Doink the Clown, and “The Bad Guy” Razor Ramon.

Jarrett’s greatest success in the WWE came as an Intercontinental Champion, a title he would win six times, the first coming at the 1995 Royal Rumble in where he defeated then-champion Ramon, thanks in large part to his new sidekick/manager, the Roadie (a.k.a. “Road Dogg” Jessie James). After trading the IC title a couple times with Razor, Jarrett eventually lost it to Shawn Michaels as he was steadily rising in importance in the WWE. Jarrett would go on a hiatus and returned back to the USWA.

The title loss to Michaels intersected with Jarrett’s promotion of a country single “With My Baby Tonight,” which he actually sung live that night prior to the match at the July 1995 In Your House pay per view.

The short stint back in Tennessee gave way to a return back to the WWF by late ’95, where he jumped into a feud with Ahmed Johnson, but in the meanwhile, his former protege, The Roadie, revealed in fact that he was the one who sang Jarrett’s song and that Jeff was just moving his lips. Regardless of kayfabe, Jarrett and the WWE were in dispute over money and by October ’96 he was in WCW, where he spent a year in and out of the Four Horsemen and bumping against the NWO.

Jarrett’s back and forth movement saw him return to the WWE in ’97 only to leave again in October 1999 to head back to WCW. Jarrett was pushed as that company’s World Heavyweight Champion on four occasions but it was all during WCW’s sinking into irrelevance and then closing by March 2001.

Shortly after the fold of WCW, in June of 2002, Jeff and his father would form what was then known as Total Nonstop Action Wrestling. Along with the establishment of TNA, which still exists today as Impact Wrestling, Jarrett also reigned six times as NWA World Heavyweight Champion. At the end of the day, the WWE needs to recognize Jeff Jarrett as a big time contributor during the Monday Night Wars era and a guy who became a big-time investor with the gall to even try and compete with WWE, even if it greatly annoyed the McMahons.

Many who would argue against Jarrett’s induction would likely point to his rocky official ending in 1999, where as IC champion Jarrett reportedly forced McMahon to give him $200,000 to relinquish the title to Chyna upon his leaving WWE to return to WCW. Jarrett’s tough negotiation saw him at a rare advantage over McMahon, who was scared to see his title go along with Jarrett over to the competition where it would likely be mistreated and disrespected in story-lines.

As it would turn out Jarrett got the money and Chyna became the first ever woman in the WWE to capture a title previously only held by men. Chyna herself confirmed rumors that Jarrett and Vince Russo colluded for Jarrett’s contract to expire and then force money out of McMahon’s hand but Jarrett insists that his negotiations were in good faith and that he was being paid money that was owed to him along with money gained from the initial public offering of the then-WWF, which took place two days after Jarrett left.

Jarrett is a good addition for the WWE Hall of Fame in this regard — he was the last person to spark any legitimate compettion with the company for the past 16 years. TNA failed in that effort, but it still adds to the business overall as a decent supplemental draw for fans to follow. WCW was a hard act to follow in regards to threats to the crown that WWE holds, but you can’t take away the longevity and talent that TNA had to offer, some of which (including Samoa Joe and AJ Styles) are featured very prominently today in the WWE.

Fences have been mended often in this current area of shared responsibility and outreach with Triple H, who has played a role in McMahon reuniting with the likes of Kurt Angle, who himself defected to TNA after his initial successful run in WWE.

If Angle and the likes of the NWO, the Four Horsemen, Sting and Goldberg can be inducted in the WWE’s Hall of Fame then why not Jeff Jarrett, because after all, “Ain’t he great!”