Allen Cunningham / for Chicago Sun-Times
Marist’s Morgan Taylor (20) controls the ball to get a shot just before half against Marian Catholic on January 11, 2018. Taylor was one of multiple Chicago-area boys basketball players nominated for the 2018 McDonald’s All-American Game but for the third consecutive year no Illinois-bred players made the high school showcase.

Justin Dukes is a contributor to WARR.com; The City Game focuses coverage on the game of basketball at the amateur levels in and around the city of Chicago

As this year’s annual McDonald’s All-American games are set take place this March, once again it is showcasing the country’s top high school talent, but the showcase is entering a new period of transition.

After seven consecutive years being hosted in Chicago’s United Center, the best boys and girls high school basketball players will take their games this year to Atlanta’s Phillips Arena as the operation gets back to its roots as a rotating event throughout the nation.

The McDonald’s game played the high road in separating itself from Chicago but the break-up from the area can be perceived as more bitter than it maybe should given that for the final two years it took place in the city of Wind no ball players representing the City, Cook County or anywhere else in Illinois were selected to be anywhere on the boys roster, neither on the East or West teams. That unfortunate streak extends to three this year. 2015 marks the last time an Illinois boys basketball player played in the game, former Stevenson High School phenom Jalen Brunson, he now being one of the veteran leaders on No. 3 Villanova.

Illinois asserted itself as a hotbed of talent over recent years, the McDonald’s game taking place in Chicago helped lend credibility to the idea that no other city produced more talent. It was hard to argue such a thing in a year like 2014 when two players from the city’s Public League (Cliff Alexander, Jahlil Okafor) and one from the immediate suburbs (Tyler Ulis) were named All-Americans and recent Chicago All-Americans were dominating in college (Jabari Parker), and standing out in the pros to varying degrees (Anthony Davis, Iman Shumpert, Derrick Rose).

One could only wonder what has been the cause for the drought, but there are likely a variety of push and pull factors that were to blame.

“It has happened before, but we know that we have a lot of talent here in Illinois. I thought the drought would be over this year because of the high major players, but I was wrong. Hopefully this makes next year’s players go much harder.” said Marist High School guard Morgan Taylor.

Taylor started 2017 as a prospect only true area enthusiasts would know about, by the turn of 2018 he was garnering headlines and he stood with an outside chance at making the All-American game. Taylor’s 18 points and four assists a game, with 80 percent shooting from the free throw line are still nothing to ignore.

In garnering control of a RedHawks team that lost a lot of talent due to players due to transfers, Taylor — he himself a junior year transfer from Brother Rice — became the focal point of the program in his final year, bringing his ability to get to the rim, lateral quickness and prowess on the defensive end and unselfishness to a team in need of an identity.

Morgan Taylor @TaylorT30 from Marist High School has been nominated for the McDonald All American Game! Still under the radar in the 2018 class. Coaches looking for a tough, athletic, all-around PG should take notice. https://t.co/T8ZKlx62iY

While the absence of Illinois players being showcased has been a head scratcher, there have been some bright spots throughout Illinois this season and they’ve already played in some of the biggest regular season showdowns of the ’17-18 season. Taylor, along with players such as Morgan Park Mustang guard Ayo Dosunmu and Simeon Wolverine forward Talen Horton-Tucker have had their talents on full display all season long.

Dosunmu is a 6’4 combo guard that who’s ability to control the pace of the game centers around his craft and skill with the ball. He has great court vision, is great with changing speeds and can be a shot maker when called upon. To no one’s surprise Ayo earned a spot on the ESPN 100 list and his commitment in the fall to the University of Illinois was a big story throughout the state.

Unofficially given the title of the best small forward in Illinois, the 6’5 Horton-Tucker’s game looks official with tremendous length and capabilities as a defender along with his advanced ability to finish at the rim.

“He knows how to play the game — his passing instincts, his creativity and understanding of game situations,” said City/Suburban Hoops Report publisher Joe Henricksen to the Des Moines Register.

“This list keeps going of all the attributes that you look for in a high IQ basketball player with a feel. High IQ and a feel, and you combine it with a skill level? I mean, those are hard to find.”

Horton-Tucker has committed to Iowa State University along with another Chicago standout, George Conditt of Corliss, after his own high-profile recruitment process.

“For Illinois not to have a McDonald’s All-American for three consecutive years speaks to the drop-off in talent the state is experiencing since 2015.” said CBS 2 sports anchor Camron Smith, a former Public League player himself who also covers local prep basketball for WCIU sports and Comcast 100.

“It was shocking that Morgan Park’s Ayo Dosunmu, one of the best guards nationally, was overlooked for his play dating back to his junior season and AAU production last summer. Ayo is a Top 30 player on every national player ranking. A case could be made for Simeon’s Talen Horton-Tucker. The senior exploded this season with great performances on some of the biggest stages in the nation. Unfortunately, it was too late for Horton-Tucker to firmly plant himself among the country’s best in the eyes of the MCDAAG voters,” Smith added.

“Despite the lack of MCDAAG selections on the boys and girls teams for 2018, things will swing back in favor for Illinois. Droughts don’t last long when it comes to basketball in this state, so look for multiple MCDAAG selections in the next few years.” 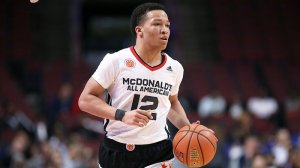 Getty Images
Jalen Brunson, the last Illinois boys representative in the McDonalds All-American Game, competes in the 2015 contest. Brunson has since won an NCAA national championship and continues to star at Villanova.

With Illinois in years past being a staple for top high school basketball prospects, the likelihood of it just falling off the map is very unlikely and points to a potential issue in politics as the reason players from the state have been noticeably absent the past few years.

Dosunmu and Horton-Tucker have both committed to quality programs in top conferences but Illinois and Iowa State respectively fall short of the list of true national powerhouses such as Duke, Kentucky and Kansas.

From 2008 to 2015, all McDonald’s All-Americans from Illinois committed to either Duke, Kansas, Louisville, Villanova or were ranked at 25 or higher on the ESPN 100 list. Dosunmu is ranked 33th and Horton-Tucker ranks 76th. A little lower profile for each, in combination with the programs they committed to, just weren’t the recipe the panel selecting the McDonald’s game rosters were looking for.

Being in the era of technology, the growth and development of the internet among other tools could also be looked at as another reason Illinois All-American numbers have dissipated. The first instance in the history of the All-American game with no Illinois player on the rosters was 2009, and that is no coincidence.

In previous years the selection committee would usually look in the hotbed cities for ball players, but now with this newfound access, the playing field has more or less been leveled across the board. Obviously this doesn’t take away from the talent in Illinois, but standing out among a crowd filled with more talent than ever from more areas of the United States can prove to be a larger challenge.

Now with the game not likely to return to Illinois for several years at the least, the game could use representation by the Prairie State next year more than ever in order to avoid becoming an afterthought in the new landscape of basketball prospect conversations.

Whatever the case may be with regard to obstacles that Illinois players are facing getting back into the All-American game, the players need to only concern themselves with what they can control and continue doing what they do best.