Terence Sean Davis provides dispatches from the worlds of art, life and food in Chicago, where it’s always Gourmet Season

As a child I was always intrigued in the Winter X Games, it seemed like a wave I could join with ease if for no other reason than my exposure to the cold Chicago winters gave me plenty of practice in dressing against the cold and exploring rugged terrain.

The city blocks I navigated weren’t as snowboard-ready as the mountains I’d see on ESPN, but it wasn’t hard to place myself in those spots on certain Saturdays when I had nothing better to do than watch boarding and ski events for hours. The setting around me allowed for skateboarding, which I was a fan of, but I always wanted to try my hand at being a snowboarder, carving the steepest slopes of the Rockies with Redman’s Muddy Waters as my soundtrack.

It took me long enough, but I would eventually visit the land I’ve so often imagined of — Colorado — to see the sights in the Rocky Mountain State in celebration of my latest birthday. I was bound for the mountains of Breckenridge, but before playing out my Winter X fantasies I got a chance to celebrate my born date with dinner in Denver.

The marquee at Ophelia’s

Ophelia’s Electric Soapbox, located in Denver’s Ballpark area, was where my celebratory evening began. A rather interesting spot, Ophelia’s kinda reminds you of a brothel when you see the chicks in lingerie in window walking up.

Of course they’re only mannequins, though, I said I’m in Denver, not Amsterdam, although it’s much harder to tell the difference in regards to Denver’s smoke shops, of which there are more of than Starbucks or any other type of business in this particular area, even breweries as well. Such is life in the new marijuana capital of America.

I’m more likely to seek a good Stout or IPA than a spliff of Incredible Bulk but in taking in the hipster vibe from the Ballpark area you feel welcome to vibe anyway you want. Maybe you’ll appreciate the lack of an Urban Outfitters too, but the pretty conspicuous homeless community may give you more serious food for thought.

My explorations kept me in my typical Gourmet mode — I needed to see what the Ophelia’s menu had to offer. Offerings for a King, it would turn out. My girl suggested the pork belly first, which seemed sensible, but while the sound of the delectable dishes were interesting, I couldn’t help taking in the scenery.

A huge projector screen played the center of the venue with Bollywood movies for our enjoyment. The super cheap-ass special effect scenes were hard to take my eye off of. House of Blues Chicago patrons would find themselves at home in Ophelia’s with its first floor, which was pretty live, and two upper levels with dinner tables.

Much like the HOB this is a spot where you could take care of all your entertainment needs for an evening from live performance to the eats. They take care of the scenery here, providing a dimly lit, vibrant energy as you walk to your table. It’s a trendy spot, but an endearing trendy, not True Religion jeans trendy.

So back to this pork belly. It’s not often I eat pork, but even swine is hard to turn down when presented as it was here — most notable was the dish’s drenching in Tamari Chimichurri with parsnip puree, mint and smoked almond, which translated to a smokey cinnamon.

Add on a mint finish sautéed into the pork belly and you had a very ambitious flavor profile that worked perfectly.

I finished the first beverage, the “Airedale.” with Bourbon, Aperol and grapefruit oil, that turnt the lit levels up and gave me a taste for the Ska Brewing Bad Hop Contract Double IPA 8%. Fittingly, all eyes pointed me to the Drunken Mussels at this point, a peripheral look, like checking the thickest chick you see in Walmart, but you’re with wifey so you wouldn’t dare be obvious.

A somewhat tart dish, featuring a side of Gamilli Pasta topped with chili, fennel and fresh herbs, those mussels came in a decent size and lightly-cooked pairing well with the pasta, heavy with flavor but not overbearing. 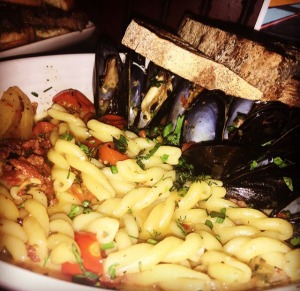 After a heavy, filling meal like this I wouldn’t dare bother you with my exploits in trying to go for imaginary gold in Breckenridge, but I had fun though.

The Denver area certainly isn’t lacking in options no matter how you like to get high on the scale of “naturally to artificially.” If you happen to be in the Ballpark area or elsewhere downtown keep Ophelia’s in mind for a date night, preferably a second or third date, a good move there — watch live music, eat, and rage a bit. The drink menu is colorful but potent, with plenty of good gins, bourbons and absinthe-based beverages.