Sidney Brown writes on the Blackhawks and the NHL for WARR, look for his weekly dispatches from the front lines of hockey fandom

After a hot start to the young season, things have cooled down in a major way for the Men in Red.

Scoring has dropped, penalties are pilling up and the defense fails to protect their goaltender consistently, allowing soft goals in the process. The result: a 5-5-2 record to end the month of October.

As a team that should be carrying with it an attitude of something to prove from the disappointment of last year’s playoffs, the Hawks can’t stand to miss a beat with their all-around game, but the last two weeks have shown that this team has a long way to go in becoming championship contenders once again.

With stars Jonathan Toews and Patrick Kane struggling there has been space for the Hawks’ newcomers, along with some young veterans, to make their mark early on and this group below has done well in proving why they should receive more ice time. 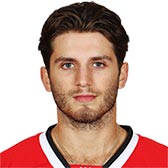 As far as goaltending goes, Corey Crawford (5-4-0 record, .935 save percentage) remains the man in net and new backup Anton Forsberg (0-1-2 record, .895 save) has been serviceable, but he should have a couple of victories in the win column.

The energy displayed on the ice in the last couple of weeks has been non-existent (lacking particularly in road games at Las Vegas and Colorado) and the team defensive play has been inconsistent. Can these mistakes be corrected? Yes, it’s still early in the season. Hopefully such negatives won’t be in place by the end of November, when we should know a whole lot more about the potential of this new version of the Hawks.

The competition heats up a bit heading into the second month of the season with a total of 13 games and yes, on a positive note, the annual circus trip is no more.

Not having to travel anymore due to the United Center being occupied means a near even distribution of home and away games for the first time in many a November.

Philadelphia, Montreal, New York Rangers, Anaheim and Dallas will be among the teams travelling to the UC while the seven-game road slate for the Hawks includes Tampa Bay, division foes Minnesota and Nashville and the defending Stanley Cup champion Pittsburgh Penguins.

As this team continues to find its identity, will the stars break out of their slump?  Which newcomer will separate themselves from the pack? Will the power play turn around?

Programing Reminder: Listen to The D & Davis Show this Saturday on chicagolandsportsradio.com when the guys are joined by former Blackhawk and three-time Stanley Cup champion Bryan Bickell along with his wife Amanda as they’ll discuss life after hockey, living with Multiple Sclerosis and reminisce on his days playing in Chicago!

The D & Davis Show airs every Saturday from 11 am to 2 pm on CSR, keep up with the show on Twitter and Facebook.