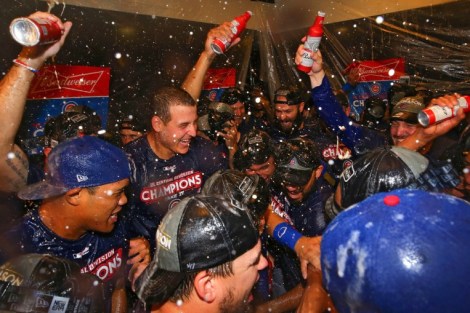 Chicago Sun-Times
The Cubs celebrate with Budweiser baths after clinching the NL Central Division for a second consecutive year earlier this week in St. Louis.

Justin Dukes covers the Chicago Cubs and their developments for WARR.com

Many doomsday scenarios have been presented all season long for the defending world champion Chicago Cubs — how could this franchise, so attune to losing throughout its history, do what so many other world champions have not and compete earnestly in their defense season? And not only compete but maintain control of their ever-competitive division?

Well, any doomsaying or negative thinking in general can officially be put to rest again, there will be no cancelled forecast of the NL Central title being beyond the North Siders’ grasp this season.

With a 5-1 win Wednesday night over division rival St. Louis Cardinals, the guys were able to celebrate and do so almost as enthusiastically as last season due to the never-ending supply of doubters that came with a tough start and a season that played out less dominantly than 2016 did over the Cubs’ Midwestern rivals.

“To be able to do it here in St. Louis, the series that was anticipated when we would do it, was definitely cool. These guys have been great all year,” said Cubs shortstop Addison Russell to MLB.com.

“We started out a little bit slow, but I knew as the year went out, we’d get better and better. We started out with a goal in Spring Training and we’ve hit that goal every single day. I feel we’re playing our best baseball right now.”

Going in to the all-star break with a losing record, the Cubs had a reversal of fortunes for the second half of the season, ending up as the first defending champion to defend its division title in MLB since 2009. As tiring and redundant as it may have been to hear manager Joe Maddon say how fine the team is or will be, his players have done their best to prove him right.

In the clinching game versus the Cardinals, the Cubs received timely contributions from players like Russell who provided a 3-run homer and pitcher John Lackey, who struck out the 10 last consecutive batters, to step to the plate. Leaving the Cubs last season to join the Cardinals for a 5-year, $82.5 million contract, center fielder Dexter Fowler could do nothing but watch a familiar scene of his old teammates enjoying a hot streak going in to the post season.

Racing to the locker room after the game, “W” flags blowing in the wind and champagne stinging the eyes of jubilant Cubs players, the biggest sting likely came to the losing team seeing the Cubs celebrate on their home field.

“It freaking [stinks],” losing starter Michael Wacha said to the St. Louis Post-Dispatch. “You never want to see anybody celebrate on your own field. It’s not a very good feeling.”

Presumably the Cardinals were going to come out with a renewed sense of purpose in the final game of the series, but that was not the case. Only scoring one run in the series closeout Thursday night, outfielder Leonys Martin made the win for the Cubs official with a game saving catch off of a long drive by Cardinals outfielder Carl Dejong.

With this added win for the Cubs, the Cardinals were officially eliminated from post season contention.

In taking on the Cincinnati Reds this weekend, the Cubs are probably breaking sport protocol and looking ahead to the National League Division Series against the Washington Nationals, to start on Oct. 6th in D.C.. Specifically, a 25-man lineup needs to be established, from starters to the bullpen to the backup catcher, this will be as crucial of a time as ever for the Cubs.

Regardless of what decision is made, the Cubs, like any team with games scheduled in mid-October, are right where they want to be. The Cubs are playing their best when its about to matter the most — definitely a formula for success.