Justin Dukes covers the Chicago Cubs and their developments for WARR.com

As easy as it would be to dismiss the Chicago Cubs’ struggles throughout this season as a championship hangover that will soon be resolved, to do so would be a massive oversight.

Defending champions usually receive the benefit of the doubt, and in the case of the Cubs, it’s the belief that the team’s pitching struggles will be amended sooner rather than later.

Up until this point of the season, pitcher Jake Arrieta just hasn’t been himself. A former National League Cy Young winner, Arrieta has been a shell of that version of himself and honestly doesn’t seem to have a solid identity for this season.

In comparison to his Cy Young season’s 1.77 ERA (earned run average), Arrieta is carrying a bloated 4.68 this year. Anyone with two functioning eyes can see that the velocity on his pitches has declined and to cap things off, manager Joe Maddon doesn’t seem to trust Arrieta past the fourth inning.

Hoping to alleviate some of the lofty expectations on this Cubs team, Maddon religiously proclaims this team while inconsistent, will eventually work their way out of it.  Truth be told, in such a mediocre division, the Cubs will likely be able to create the illusion of stability by backing into the post season amongst the hints of mediocrity resonating from their dugout.

Pointing to his pitching mechanics as the reason for his up and down season, Arrieta feels that some minor tweaks could be the turning point of the season. It was those same mechanics that earned him his name in Chicago, so Arrieta presumably has a blueprint for success.

A free agent after this season, Arrieta still has plenty of reasons to want to stay in Chicago. However, the Cubs may have already begun considering other alternatives in the pitching market.

Grabbing Keegan Thompson from Auburn University and Erich Uelmen from Cal Poly-San Luis Obispo in the 2017 Amateur Draft, the Cubs made it a point to not limit their options as far as pitching is concerned. 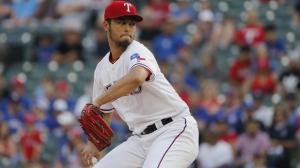 Tony Gutierrez / AP
Texas Rangers hurler Yu Darvish may be part of the pitching Calvary the Cubs call on to save their pennant chances.

Another viable and more immediate option for the Cubs would be Texas Rangers starting pitcher, Yu Darvish.

A former interest of the Cubs when coming to the Majors, he could definitely plug up some of the holes in this ship, but at the moment his team has not made him available, so the Cubs may have to weather the storm until that moment ever arrives.

Ultimately, the Cubs should ride things out with Arrieta for the time being. With such a talented roster surrounding him, they should be able to put together a good number of wins which is presumably the time frame Arrieta will be able to regain his old form.

Should that not be the case, Maddon will need to really consider making an adjustment.

One response to “Cubs: Arrieta Stays Face of Team During Up & Down Season”