Who would have thought that after all the locker room disputes, lack of chemistry among the team, supposed lack of leadership from the head coach and the general management disappointments, the Chicago Bulls would actually be in the playoffs!?

The Chicago Bulls barely skated their way through from a rigorous roller coast regular season into the playoffs. With the first game against the number one seed Boston Celtics taking place Sunday, there are a couple reasons why the Bulls have a chance making this a competitive series.

One reason why the Bulls have a chance is because of history. History tells us that even though the Bulls may not have a chance to win the series, there will always be an uphill battle the opposing team will have to face when it comes to playing teams above .500, especially the Boston Celtics and any team LeBron James is on.

In the Tom Thibodeau era, the Bulls brought physicality on defense and they always made games tight and close. We’ll see if Fred Hoiberg can bring that same intensity to the new look Bulls.

Reason number two is due to the increased play of the three alpha males. Jimmy Butler is known to step up his game come playoff time. During Butler’s last go around in the playoffs, he averaged a career-high 23 points a game and two steals a game. In his last 10 games, Butler averaged 27 points a game. If he brings that same aggressiveness to the series, it will put the Bulls in a better position offensively against one of the premier perimeter defenses in the Eastern Conference. 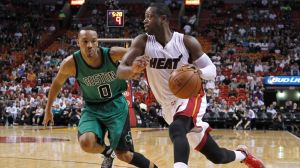 AP Photo/Joe Skipper
Dwayne Wade has much experience killing playoff dreams, including multiple times against the Celtics. The Bulls will take as much of the old Flash as they can get.

Rajon Rondo and Dwyane Wade can add to the aggressive play Butler has set the tone with all season. Wade averaged 22 points a game last year in the playoffs, which is his current career average come this time of the year.

If Wade can stay healthy, Flash can be a tough assignment for Boston to defend, especially combined with top 15 dual player in Butler. Rondo averages 14 points and 9 assists come playoff time, and with his increase averages of 13 points, eight rebounds and 47 field goal percentage, the floor general will need to make his presence know against his former team.

On the defensive side of the ball, I trust Butler, who has proven to be one of the top two-way players in the league, guarding MVP candidate Isaiah Thomas, but the bench and Al Horford matchup concerns me. Terry Rozier leads the charge for the high-powered bench on the offensive end, and the Bulls’ bench may not have the perimeter defensive presence to hang with a speedy, skilled offense like the Celtics.

The Bulls lack agility and quickness when it comes to defending stretch big men. With Horford adding shooting ability to his portfolio, it can be a matchup nightmare for the Bulls, something Brad Stephens is already adding to scouting report and looking to exploit.

The Bulls have a lot of potential to win this series, but I think Boston is just too strong on the bench and more disciplined to execute the game plan down the stretch, especially with “fourth quarter” Thomas leading the charge. Boston wins the series in six games.