Nothing fastens the breaking point of one’s career in the NBA like nagging injuries.

If Penny Hardaway did not have his knee injuries, he possibly could have been a champion, if not in Orlando than elsewhere and there may not have ever been a Shaq and Kobe combination.

If newly inducted 2017 Hall of Famer Tracy McGrady and Chinese legend Yao Ming did not have the injuries that slowed them down they may have brought a title to Houston. Grant Hill could have been seen definitely seen as one of the best players of his generation and could have won in Detroit or maybe more in Orlando or Phoenix.

South Side Chicago native Derrick Rose had so much promise, however, injuries have set back that potential. Now, we might be looking at the ending of Rose’s NBA career after he was set aside last week for the remainder of this season, his first with the New York Knicks after seven overall disappointing years with his home-town Bulls. 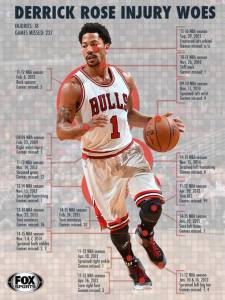 Credit: Fox Sports
This graphic details Rose’s injury history throughout his time with the Chicago Bulls through the 2015-16 season.

When Rose entered the league in 2008 as an No. 1 Overall Pick, he had so much potential to lead a team in the right direction to one day eventually an NBA Finals, his 2011 MVP campaign ended with a derailment in the Eastern Conference Finals against the Big 3 in Miami, but it seemed at the time that that battle would endure and Rose would take on LeBron James and Co. for control of the Eastern Conference for years to come.

But after suffering his first knee injury (torn ACL) in the 2012 playoffs, all those hopes and dreams took a turn for the worst.

Rose tore his meniscus in 2013, a little over a year after he came back from the initial torn ACL. Later came a re-tear of the same meniscus in 2015 and then right before the 2015-2016 season, his last in Chicago, he suffered a broken left orbital bone in the team’s first practice, leaving Rose with blurred vision for parts of the beginning of the season.

And after having played the majority of the past two season, with it seeming like Rose was about to take a few more steps forward, maybe steps out of New York, he suffers another setback with a torn meniscus, which he recently had surgery for and will now be sidelined for the next three-to-six weeks.

With free agency coming in July, many Rose fans questioned whether we can even see Rose in an NBA jersey next year, especially given reports of him insisting on drawing a max contract. The unfortunate reality of Rose’s future in the NBA is very, very slim.

Rose has always been a speedy, driving force when it came to offensive production. We must remember he has a career average of 20 points, six assists and four rebounds a game, that average shoots up to 24 points in the playoffs. Accolades include his being named a three-time All-Star, Rookie of the Year, All-Rookie Team, All-NBA First Team and that league MVP on his. Not to mention this year with the Knicks, he averaged a respectable 18 points a game, five assists and 3 rebounds a game, close to his career averages.

Englewood’s finest has proven he can still perform at a relatively high level, but with the history of numerous surgeries and doctor visits on his resumé, it will be tough for his application to get valued enough for a high-paying contract this summer. General managers around the league already see him as a fragile employee. With his latest setback, it only puts a staple on their perception of his future in the league. And since Rose has a high asking price for his services, most possible opportunities for the role he wants to serve will not be on the table.

Rose cannot lead a team as the main player on the squad like he used to, but his production is still highly valuable to the point where being a solid backup or sidekick for a star is visible. If Rose does not lower his asking price, we either may not see him in an NBA uniform again anytime soon, or the possibility of professional basketball overseas will have to be evaluated.