The month of February was very kind to the Men in Red, despite therecent  hiccup against the Edmonton Oilers following their bye week.

Sitting with a 38-19-5 record, the Chicago Blackhawks are operating on all cylinders, winning on the road, scoring with consistency offensively and complimenting their strong goaltending.  With their recent dominance away from the United Center, Chicago is on pace to set the franchise mark for most consecutive wins on the road all-time.

Inside the Numbers from February

The top line of Jonathan Toews, Nick Schmaltz and Richard Panik deserves a lot of credit for the Hawks hot scoring streak.  With constant lineup changes throughout the season, pairing linemates with Toews seems to have finally clichéd.  In 10 games together, Toews, Schmaltz and Panik have a combined total of 15 goals and 24 assists.

Will this top line be as dangerous as the 2nd line of Kane, Panarin and Anisimov come playoff time?  If yes, the Hawks will be more dangerous and the top team to come out of the Western Conference.  Along with the 1st line group, their have been other players that have made their mark this month for Chicago.

Last Friday, the Hawks acquired Tomas Jurco from the Detroit Red Wings in exchange for 2017 3rd round pick.  Jurco has scored a total of 15 goals and 24 assists in 159 career games.  The 24 year old will be inserted onto the 3rd line to add some additional scoring while helping out defensively. 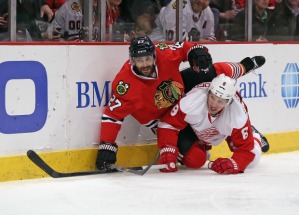 Jonathan Daniel/Getty Images
Johnny Oduya mixes it up with Justin Abdelkader of the Detroit Red Wings in a 2014 clash.

Tuesday the Hawks welcomed back old friend Johnny Oduya, a member of the 2013 and 2015 Stanley Cup winning Chicago teams. The 35-year-old defenseman was moved for forward prospect Mark McNeill and a conditional fourth-round pick in the 2018 draft. Oduya left the Hawks as a free agent after the 2015 championship run, ending his first run in Chicago, which started when he was acquired at the 2012 deadline.

Previewing the Month of March

Entering the final full month of the season, competition will be ramped up to the max with not just division opponents, but some of the beast from the Eastern Conference. Their eight home games at the United Center will include Pittsburgh, Columbus, Anaheim along with division opponents Colorado, Dallas and Minnesota.

The eight games away from home will include Nashville, Toronto, Montreal and Pittsburgh.  In coming down the home stretch, is important to clinch home ice throughout the playoffs or playing consistently being injury free heading towards the second season?  The answer will become very clear over the next few weeks.

To defenseman Duncan Keith for tallying his 500th career point with an assist in Sunday’s win over St. Louis.

To “Captain Serious,” Jonathan Toews, for being named the NHL’s 2nd Star of the Week (4 goals, 5 assists) in three games last week.