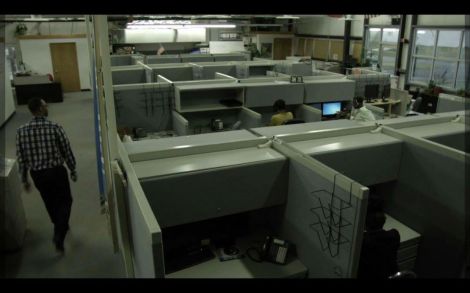 Let’s be real, no one aspires to work in a call center, no little kids are dreaming today of being an all-star for an upstart company with “intel” “tel,” or “com” in its prefix or suffix.

Call centers aren’t obvious settings to spark the imagination or places where success is defined — as least “success” outside of hitting the seemingly random stringent daily, weekly or monthly quota marks posted in the break room — but one “Call Center” in particular has made itself the setting for a funny and refreshing look at a workplace most of us have a little experience with.

Chicago-based director Anton Deshawn takes us into the world of the “Call Center” in his feature film debut, which stars Andre Truss (Chicago Heights) in a charismatic lead performance as a mischievous call center supervisor named Marcus, who devises a plan to get even with his employer (“Oral-Tel”) after being overlooked for a promotion.

Truss gives the air of a fully recognizable everyman in this performance — a mid-20s post-college graduate with ambition and creativity in him (outside of the call center, his character records podcasts and dreams of a career as a top radio personality; ed. note — a scene in the film was shot in studio with The D & Davis Show) but who has to pay the bills in the meantime and has no problem cruising through a mundane position that he has an easy grip on while he figures other things out.

Among those other things to figure out is his best friend Dwayne, played here in a wonderfully outrageous performance by comedian Brian “Da Wildcat” Smith (Shaq Comedy All-Stars, Of Boys and Men) who sort of stands as an more mannish “Cameron Frye” to Marcus’s “Ferris Bueller.” 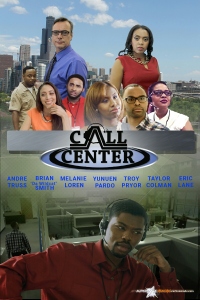 But we don’t see these guys during any days off, we get more of an on-point depiction of wiling around the days in between the cubicles of a nondescript office setting that anyone who’s worked in a call center can identify with — making fun of callers, trying to hide your inactivity from the roaming supervisors and hollering at the cute girls down the aisle from you — we get all of that in “Call Center” in several quick sequences that move well, seemingly to take advantage of Da Wildcat’s great ability to improvise and allow the viewer to enjoy some good laughs while moving breezily towards the eventual conflict between Marcus and his employers as the prank he does out of spite backfires and puts him in a position where he has to sacrifice his own career to save the positions of his co-workers.

Call Center never gets too heavy with the drama but it establishes the stakes well in a script put together by Deshawn. He and long-time ILL-HIO studio production partner Rahim Branch show sure hands born out of their experience making several short films in their handling of this first feature-length production and its diverse cast, which also includes Yunuen Pardo (Cowl Girl) as Marcus’s love interest from the call center, Melanie Loren as Marcus’s devious supervisor and Troy Pryor as a kiss-up (in more ways than one) and Marcus’s eventual competition for a promotion.

Just as the average call center employee can never be too sure of what they’ll get on the other line when they dial in, viewers can never be too sure of what they can get from most up and coming directors, but with “Call Center” Anton Deshawn and ILL-HIO productions connect on the best levels and create the kind of broad yet identifiable and original comedy that has been missing from bigger productions as of late.

If you get a chance to check a screening, make sure you don’t leave this one hanging on the line.

Learn more about “Call Center” and keep up on its latest screenings on Facebook and on Twitter.