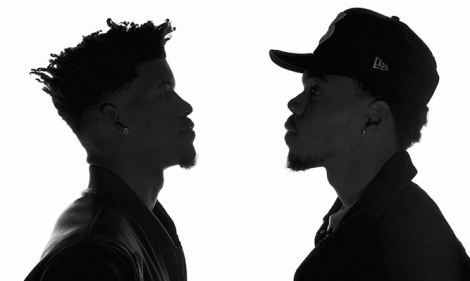 ESPN
Face off: Two of the Chi’s most recognizable faces today: Jimmy Butler (L) and Chance the Rapper as depicted in ESPN the Magazine’s latest Entertainment Issue.

This week is one for all-stars, as the NBA salutes its highest echelon of players. Earlier this week the music industry did a similar thing at its Grammy Awards.

At those Grammys, Chicago’s Chance The Rapper (or Lil’ Chano from 79th to make it even more local), had not only the equivalent of an all-star breakthrough, but you could argue it was his first title reign, sort of his June 1991 moment, equipped even with an image that evokes memories of Michael Jordan’s ascent into immortality upon winning his first NBA Championship. 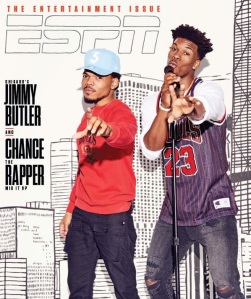 Jimmy Butler is now an established all-star in the NBA, a starter for the Eastern Conference in this Sunday’s game. He would certainly like his own championship moment too — he’s not in the best position right now with his Bulls, but he’s certain to argue with you regarding whether or not he’s in the right place.

Chance and Jimmy exist as two of, if not the two most, recognizable faces in Chicago right now, a city that seems to share the spotlight and a sense of siege as much as any American city at anytime. At one moment the president is decrying the town with an overstated sense of apocalyptic danger, in the next a national magazine is showing two of its most shining stars in perfect harmony.

It makes sense that both Butler and Chance set their sights on and against President Trump’s blind missives against their city in ESPN The Magazine’s latest Entertainment Issue, available for sale today.

It makes a little less sense that this article, as on point as it is in sizing up Butler’s place in our city’s stratosphere and how it reflects across the entertainment landscape, could be a relic soon if Butler gets traded from the Bulls, as so many who follow the NBA suspect could happen prior to the league’s trade deadline later this month. Butler may soon not have to live up to the legacy of the No. 23 he has on the ESPN cover but more of a Green and White No. 33 for a town far away from the twin storylines of dysfunction and needed repair that surround both Chicago and its Bulls.

On more positive notes, the two not-quite overnight sensations both speak on their unique paths to stardom, their growing relationship with each other, existing as new leaders on a civic level and beyond and plenty more with Justin Tinsley of The Undefeated (the feature has been available on The Undefeated website since Wednesday). Some select quotes:

On what brings sports and music together

To me, I feel like basketball and hip-hop have always been kinda conjoined because they’re very similar in their competitive nature, you know what I’m sayin’? It’s about technical skill, and then there’s just God-given talent. (Chance)

On finding success through your own way

It’s important. The way you live may change, but what’s in your heart—that can never change. You know, I keep the same people around me, as I’m sure he does. It’s all to keep you grounded, to remind you each and every day that you still are a kid from Tomball [Texas]. He still is a kid from Chicago. You can never lose sight of that. (Butler)

On using his platform for social activism

You have to use your face, your voice, because it’s seen, it’s heard everywhere. Just like you’re there to entertain, to make great music, to score a basket. I think, at a certain point in time in your career, it’s gonna be your time to speak up on social matters that are goin’ on. (Butler)

On Trump and how people view Chicago

I hope he’s coming in to do some type of federal overturn of our state and city budgets in terms of schooling and housing. I’m tired of n—–s talkin’ about Chicago like it’s a Third World country. Like, that it’s not a place of booming business with a very successful downtown and all types of new development. It sounds like he was announcin’ he was going to war with Chicago. (Chance)

You go down there and you change people’s lives. You make them want to do better for the next person. And that’s when Chicago is going to be a beautiful place, and nobody’s comin’ here talkin’ about how bad it is like he said, like a Third World country. ’Cause that’s not it. (Butler)

Read more at theundefeated.com or in ESPN the Magazine.

One response to “Media: Jimmy Butler, Chance The Rapper Assist Each Other In ESPN Feature”