Nobody says the NHL has it easy.

While the league celebrates its all-stars in Los Angeles this weekend, I know that (for some) you have been consumed with the NFL while others may be caught up in the NBA and the soap opera involving the Chicago Bulls. In the name of alternative programming, I figured that I’ll try my best to get you caught up and review the first half of the season for the 2016-17 Chicago Blackhawks.

The co-inhabitants of the United Center haven’t provided much in the way of self-destruction or teammates calling each other out, but in this season an identity has had to be formed, along with developing new and young players to assist the long-established veteran core. It hasn’t always been pretty — there have been some spotty times including the blowing of 3rd period leads in the last two games — but the Hawks find themselves with a 30-16-5 record and a 2nd place standing in the Western Conference’s Central Division.

With injuries, lineup changes and strong goaltending among the regular themes, the Men in Red have managed to stay near the top of the West despite dealing with some of the top contender’s struggles. In breaking down the first half, there are things that need to be highlighted and concerns that need to be addressed.

Both Corey Crawford and Scott Darling have been stellar in net and their play couldn’t have been more important than the firsts two months of the season.  The tide turned in December when Crawford had emergency surgery missing significant time, but when he returned, he didn’t miss a beat.

With Darling’s play in net as of late, could there be a goalie controversy?  The answer should be NO.  Crawford has shown in the past that he can get the job done winning two Stanley Cups and has the mental toughness you need come playoff time.

Coming into this season, due to the salary cap, new and young players were asked to fill in roles to carry the veteran core with Jonathan Toews, Patrick Kane and Marian Hossa.

A few players have stepped out and made names for themselves with rookies Vinnie Hinostroza and Ryan Hartman and Dennis Rasmussen. Whether is playing on the top or bottom lines, these young core players have responded to the challenge and their numbers show proof. 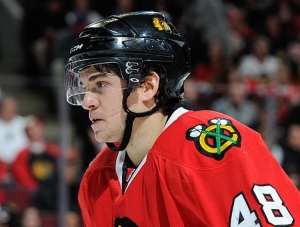 You know the veteran core by now with Toews, Kane and Hossa. While those experienced players have shown up, the young veterans have contributed in a big way making the men in red always dangerous on the ice.

Jonathan Toews: 9G, 19A – Despite missing 9 games, Captain Serious has been on fire in the month of January (3G,7A) and expect him to carry that momentum into the 2nd half.

Marian Hossa: 18G, 12A – Whether is playing on the top line or the 3rd line, the ageless one continues to produce and with good health, he will be a key player come playoff time.

The problem of the Hawks PK has been systemic all season, ranked fourth from the bottom in the NHL. The injury of Marcus Kruger from December (who returned to the lineup on 1/26), this unit has been inconsistent due to taking bad penalties, playing out of position and putting additional pressure on your goaltender.

The month of January has been an “improvement” with the team going 23 for 29 and hopefully it’s a sign of things to come trending upwards.

The play of the blue liners has been stellar with most of the veterans and a struggle at times from their rookies.  After a slow start to the season, ironman Duncan Keith has picked it up offensively scoring a goal in his last two games and posting three goals and five assists in the month of January.

Brent Seabrook’s play has trended down  the last couple of seasons due to his advancing age. Offensively, Brent has a total of three goals and 21 assists for the season but his defensive play will be critical going down the stretch. Another veteran, Brian Campbell, was brought back to hold a strong veteran core with the blue liners.

Campbell’s play has been okay offensively (4G, 9A) overall but was benched with a healthy scratch a few weeks ago. The inconsistent play of rookies Michal Kempny and Gustav Forsling are noticeable and opponents have taken advantage of that all season. Will general manager Stan Bowman trade for a defenseman at the trade deadline? Stay tuned.

10-8-1 vs. Central Division and 12-9-1 on the road: given the problems against their division foes a year ago, the funk has carried over into this season losing four games to Winnipeg and losing the last eight games to Minnesota dating back to last year.

If the Hawks want to be taken seriously, they must start beating the top teams in the division, not just the bottom feeders. The United Center is always kind to the Hawks and this season has been no different posting a record of 18-7-4, the road has been a struggle and one way to turn it around is the upcoming six game west coast trip kicking off the second half.

In years past, the Hawks have fared well away from home, victories along with consistency will be key to give the Hawks confidence in preparation for the second season.