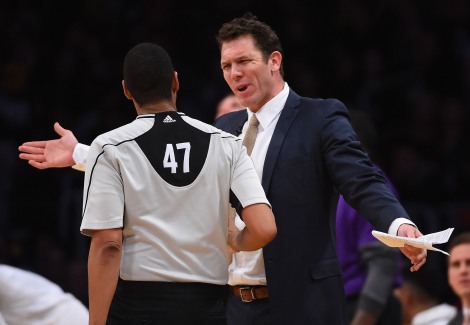 Getty Images
First year coach Luke Walton has already brought elements of success from his time with Golden State to the Los Angeles Lakers, while remaining an energetic protector of his young squad.

As could be expected, the Los Angeles Lakers have had an up and down first half of the season, currently sitting at 14th in the Western Conference with a 15-31 record. But much like the near-by (standings-wise) Minnesota Timberwolves, the record of the Lake Show is not simply the reflection of a team that is not coachable or limited in regards to talent.

The Lakers are in as defined a rebuilding stage as the franchise has ever seen, as they try to pick up the pieces and formulate something that can move Lakers Nation beyond the Kobe era. It’s taken some time to gain footing, but they are on the right track within this rebuilding process now, here are the reasons why:

As foundations of young talent go, what the Lakers are building on now is pretty sturdy. In drafting D’Angelo Russell, Julius Randle, Larry Nance Jr. and Brandon Ingram over the past three years, the Lakers have selected a diverse group of young athletes to build their next foundation. Russell’s scoring ability — along with Randle’s Draymond Green-like skillset, Nance’s athleticism and Ingram’s perimeter defense — sets the tone for the future of the Lakers.

Experience is the best teacher at times, and for these young guys, they are encountering the “growing pains” stage as they continue to process the game and how to use their skills to take advantage of their opportunities on the court. The more games they play, the more they will learn from their mistakes, increase their chemistry and grow as a unit.

As these young players progress through the growing pains, they need a solid coach with patience to help lead these young men in the right direction, not just as a coach, but as a mentor and even a father-figure, which leads to the next reason for confidene — the Lakers have the right coach in place to lead a franchise that wants to live up to decades of winning tradition.

Luke Walton was a former player for the Lakers and succeeded there under Black Mamba’s reign, winning two titles with the franchise and he also won a title as an assistant coach under the leadership of Golden State Warriors head coach Steve Kerr. Walton’s already impressive resumé also includes his experience leading the Warriors to a 39-4 record, including an NBA-record 28 straight wins to start last season while substituting for Kerr while he recovered from back surgery.

Walton’s youth and closeness in age with the younger generation of basketball should help produce a patience the team needs in developing their talent, it should also allow him to stand as a person the players can trust and really relate to from both a mentor and father-figure standpoint.

One more reason why these Lakers are showing signs of hope: the continued attraction the Lakers have to bring possible big name free agents to come to Hollywood.

While drafting for the future the Lakers have made some shrewd veteran pickups like Luol Deng and Timofey Mozgov to help direct the young Lakers, however with Walton growing into being a respected coach around the league and the continuation of growth with the young talent as observed by the rest of the league, it increases the chances LA has in recruiting a big time player to help this descending franchise remind itself of past times when players like Kareem and Shaq came into the fold and changed everything.

A history of winning is on the Lakers side, and history tends to repeats itself, so as a young Purple and Gold generation looks to the future it should feel confident knowing that there’s already some established paths ready for them to walk towards.