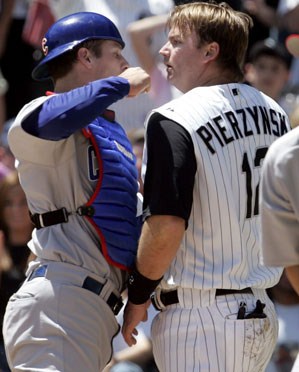 Neither Michael Barrett or A.J. Pierzyncyki are around to set the fight off anymore, but the Cubs and White Sox are still in a bitter battle for the hearts of Chicago baseball fans.

Originally published in May 2013

Ed. note — I believe in transparency, so I’ll admit right away that this is a rabble-rousing post (rabble, rabble) that at its core only exists to exploit the deep-seated hostilities between lovers of the White Sox and the Cubs, Chicago sports’ Hatfields and McCoys.

It is no secret that Chicago, as far as baseball goes, is a Cubs town.

In spite of having two teams with an equaled amount of history and that other team having won much more recently than the Cubs, it is the North Siders that move the dial — the Cubs get the bigger TV ratings, their fans are more prominent in and outside the town and their controversies are bigger.

The Cubs’ rigmarole regarding their Wrigley Field renovations this spring makes one wonder if Jerry Reinsdorf ever recently entertained another move to Tampa.

As for the White Sox, they have to just soldier on, try to stay somewhere around .500 and try to avoid beat downs like the 7-0 one the Cubs gave them in Round 1 of their four-game Crosstown Cup series on Monday. Round 2 was washed out on Tuesday evening, not long after Sox ace Chris Sale fell behind 2-0 early (hey, maybe somebody up there likes the Sox… if don’t nobody else care).

With two more Cup games starting on the North Side today at Wrigley, the showcase is even more in favor of the Cubs and with this week’s series now a 3-game set there’s no chance for a 2-2 tie now. As we head into this weekend, one team will have a clear case of bragging rights over the other and likely the hearts of the Chicago baseball intelligentsia as theirs to lose as the summer unfolds.

So who should you ride with, earnest independent Chicago baseball fan? Here’s two takes on which way to go from Ken Davis of Regal Radio’s D and Davis Show and Sean Terry of The Varsity Show (if you are a Sox fan, you may want to click back on our home page — thanks for the views! ).

This is a pretty interesting question for a city with two teams going nowhere. Let me start off by revealing I am die-hard SOX fan, but I try to incorporate logic with my fanaticism. Let me start off with the North Siders — the Cubs have an abundance of top flight prospects, from Brett Jackson and Anthony Rizzo in the majors to Javier Baez, Jorge Soler and Albert Almora in the minors. As a Sox fan tired of our base-clogging, one-dimensional players I’m somewhat envious of the Cubs collection of talent. The Cubbies will rebuild Wrigley and increase their revenue stream, which is already top-5 in the MLB, not to mention the Cubbies likely having their own network once their WGN deal is over (Cha Ching$).

Now to the South Side, three words — “we kinda suck.” I mean, up until last week Kansas City was ahead of us…..KANSAS CITY! Kenny Williams’ going all-in philosophy has come home to roost. Dunn rocks a ski-mask when he picks up his check, time finally has caught up to Pauly, and after having a real good defense last year we’re at the bottom of the majors with basically all of the same players back. As always, we can pitch, even with injuries the Sox continue to have a decent to very good pitching staff (Kenny, you get props for that).

As a Sox fan, I know if we blow up our team the fans won’t continue to show up, unlike the North Siders. Truth is, the Sox now need to be blown up like so much vinyl at Disco Demolition Night. If Chicago has to back just one team, it should be the Sox, since they have the better team today, but if the Cubs go on a hot run and have a chance to make it to the playoffs (way before schedule, by the way) Chicago should root for the Cubbies. Wow did I just type we should all root for the Cubbies, yea I did…..sad.

Chicago is coming off a very commendable Bulls regular season and playoff push, where a collective resolve and absolute sum-of-the-parts mentality exhibited by the city’s basketball team allowed it to make a fair bit of noise in light of a red shirt year for the franchise’s face. In the Bulls, Chicago fans gained fresh perspective on what effort, grit, determination and the right approach day in and day out looks like.

Unfortunately, now that the Bulls run is over, and the Hawks fate is still up in the air, summer is about to settle in full swing and sports fans now must begin to shift their focus to the baseball season. Despite slow starts by both teams, Chicago baseball in 2013 has the potential to provide fans a number of reasons to follow along (if only for a few innings) to catch a glimpse of something special from the boys of summer.

A self-proclaimed supporter of BOTH teams, albeit an oft-labeled Cubs fan, I’ll take this opportunity to give you my top 5 reasons to follow the Cubs:

5. Doing it the right way – Collective strides by the ownership and front office has already made me a believer, even if the World Series bling won’t likely materialize before 2015. So far this season, we’ve already seen the club take a serious stance on repairing its dinosaur stadium by playing cards that have always been available to them like moving to Rosemont. On the field, a very rigid approach to fixing the product is being instilled by infusing youth with contract-friendly veterans who can lead by example gives promise to a solid future for this team.

4. Front line pitching – Despite their offensive inefficiencies, the Cubs have a very formidable starting rotation. The recent return of Matt Garza, a No. 2 arm at best, means the Cubs now boast a 5-man rotation of ace in the making Jeff Samardzija, the aforementioned Garza, an under-rated Travis Wood (1.9 WAR), the surprisingly strong Scott Feldman (4 wins, 2.80 ERA) and Edwin Jackson — a five man stable capable of keeping the team competitive in series after series.

3. Youth in the making — After locking up Golden Boy first baseman Anthony Rizzo with a highly team-friendly contract earlier this season (7 years, $41 million with two team options) and with Starlin Castro, Darwin Barney and Wellington Castillo already in the fold, the Cubs can now turn their attention to the continued development of the youth down on the farm. It’ll take time before names like Soler, Baez and Almora begin to knock on the Majors’ door, but expect more roster movement mid-season with a younger, more polished Brett Jackson manning center field by July. Oh, and did I mention the Cubs have the No. 2 pick in this year’s MLB draft, with which another front line starter or bona fide position player will soon be acquired, contributing to the growing depth of the team’s farm system.

2. The CTA Red Line – With most of Chicago Transit Authority’s rail transit south of downtown on lock for the next 6 to 7 months I expect to see fewer butts in the seats this summer at U.S. Cellular Field. Without the convenience of the Red Line dropping people right by the park, Sox fans (a notoriously  absent bunch already) will have even more excuses to not show up to the ballpark. This, combined with a Chicago schools calendar creeping further into the summer, spells a bad year at the turnstyles for the Sox. When given lemons, make lemonade and if you stay north of Cermak, why not roll further north and check the Cubs?

1. The entertainment in the stands factor – Always an entertaining bunch, Cubs fans paired with Budweiser beer creates the potential to provide a different type of entertainment. If the on-field product continues to sputter this year, there’s always the prospect of a nice nacho platter, a few more cold ones and surfing the stands. If you attend the right game, you may even catch something entertaining.

Welcome back to Wrigley, Sox Fans!!!