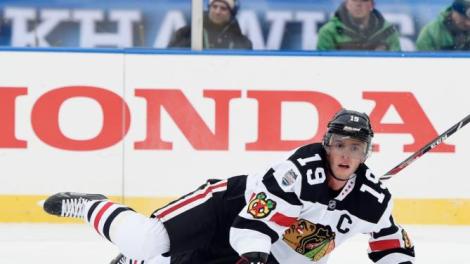 Hannah Foslien/Getty Images
Jonathan Toews hits the ice during the second period against the Minnesota Wild at the TCF Bank Stadium during the 2016 Coors Light Stadium Series game Sunday in Minneapolis.

The resurgent Minnesota Wild used their home ice advantage in the Outdoor Series showcase to defeat the Chicago Blackhawks 6-1 at sold-out TCF Bank Stadium in Minneapolis.

Coming into Sunday’s game, the Hawks were playing in their fourth outdoor game in team history, holding a record of 1-2, while hosts Minnesota wasplaying in their first. After firing head coach Mike Yeo a week prior and replacing him with ex-Hawks assistant John Torchetti, the Wild ran off three consecutive victories recently and this hungry squad was in a position to show the Hawks and the world that they were ready for the big stage.

Minnesota jumped on the Hawks right from the start with energy, hustle and intensity. Matt Dumba kicked off the scoring by netting home his ninth goal of the year at 3 minutes and 25 seconds into the first period, giving the home team an early 1-0 lead.  After a Hawks penalty, Minnesota took advantage on the power play with Thomas Vanek scoring his 10th goal of the year to extend the lead to 2-0.

The Hawks were dominated in the opening frame, trailing in the shots-on-goal department 11-9 and committing four penalties, but the snowball continued to roll. The Wild didn’t take long (2:25) to put another goal on the board in the second period as Nino Niederrieter netted home his 11th goal of the year to increase the lead to 3-0, followed by Jason Pominville (10:26) with his ninth goal of the year putting the Wild up 4-0 and setting the game’s final result in motion.

Chicago was left to wonder what went wrong again in a showcase outdoor game, a big reason was that it was undisciplined throughout. That came to light when defenseman Michal Rozsival delivered a vicious hit to Wild forward Jason Zucker (15:14) in which Zucker’s head bounced off the ice.  Zucker was taken into the locker room for observations while Rozsival received a game misconduct penalty. The Hawks put up 11 shots on goal in the middle frame but it never translated into multiple scoring chances nor traffic in front of the net.

Just before the third period, starting goaltender Corey Crawford was replaced by Scott Darling to give the team a boost in energy, but the Hawks’ play throughout the game suggested that the team was OUT TO LUNCH. The Wild capped off the final period with two more goals from Ryan Carter (2:25) and an empty-netter from Erik Haula (13:49). Patrick Kane prevented the shutout by netting home his 35th goal of the year (12:05) but the Hawks were clearly down for the count.

Give Minnesota credit for doing their homework in shutting down Chicago’s high-powered offense by crowding the middle of the ice and not allowing any room for the Hawks players to operate on the ice. The Hawks team defense was non-existent and it was evident when defenseman Brent Seabrook made a crucial turnover in their own zone which led to the Wild’s first goal of the afternoon.

The defensive coverage was out of sink, with players being out of position leading the Wild to complete countless stretch passes at center ice and operating freely in the Hawks zone. It was a rough day at the office for Chicago’s Corey Crawford as he gave up 4 goals on 23 shots but his defenders in front of him clearly left him out to dry. On the other side, the Wild’s Devan Dubyk was tested just as much as his counterpart but managed to stop 31 of 32 shots along with posting a save percentage of .969.

In watching Sunday’s game, a couple of things came clear to me. The Hawks reallyneed a fifth defenseman to help strengthen the blue line and a left winger to boost the top line. I would not caution Hawks fans to panic but there should be some concern about where this team is headed in the final 27 games of the regular season. Will general manager Stan Bowman make the necessary move(s) before next Monday’s trade deadline? Only time will tell.

One response to “Sid on the Blackhawks: Outdoors Not-So-Great For Hawks”