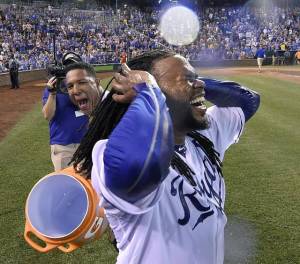 JOHN SLEEZER/Kansas City Star
Johnny Cueto won it all in KC, could he bring his braided magic to the South Side?

We Are Regal Radio co-founder and former Los Angeles Dodger scouting personnel Sean Terry breaks down the off-season plans for the Cubs and White Sox in preparation for the 2016 season. Read his earlier posts on the Cubs here and here.

Hot Stove baseball, aka the second season for the Major Leagues, officially started this week with a couple BIG dominos falling in the pitching market.

The Chicago Cubs can go ahead and scratch the names of Jordan Zimmermann and, maybe more bitterly, David Price off their shopping list this year as the two elite free agent starters solidified deals with the Detroit Tigers and Boston Red Sox respectively.

If it wasn’t already clear, this signing is an obvious indicator that the bar for bidding for starting pitching this off-season will begin at $20 million even for a player with previous arm ailments such as Zimmermann and those prices could be over $10 mil more for a regular season workhorse with an overall bad postseason record.

Ironically it was reported yesterday that Johnny Cueto turned down a 6 year/$120M offer with the Diamondbacks, so the book is still open for the White Sox to make a move for the ego-maniacal albeit effective Cueto. For as much as the Cubs have dominated the talks locally regarding Hot Stove maneuvers, expect the Sox to make their typical nugatory attempts to reel in an experienced player or two with the hopes of solidifying a lineup that is seemingly always a player or two away.

Cueto looks like he’s set to hold out for the right deal, so the Sox would be best served to fill other holes for now in an effort to get as strong a team on paper as possible before going after Cueto.

The annual reach for a big name by the White Sox is often linked with their desire to sway the fanbase into believing the Sox will be in the hunt — but stranger things have happened, and the moment fans actually lose their wits and patience with the Sox is very moment they’ll surprise everyone and actually net a serviceable catch.

Besides starting pitching, the obvious need for the White Sox this off-season is up the middle and they’ve tended to it, at least behind the plate. Unheralded acquisitions have come in the past week of catchers Alex Avila and Dioner Navarro are moves I like alot.

Call it pseudo-mathematics — addition by addition plus subtraction: not only do the Sox now have two capable catchers (the newest trend in baseball), they’ve also managed to nab the primary receiver and an abundant of tribal knowledge from the Tigers pitching staff.

The combination of Avila and Navarro to offset their dismissal of Tyler Flowers now provides the Sox with arguably as strong a catching tandem as there is in the American League in the new era of pitch framing and densive wins above replacement (dWAR).

The decision also to not tender long-time shortstop Alexi Ramirez means the Sox have to address the middle of their fielding from catcher to shortstop, in an off-season market that is particularly lean on infielders.

And while Melky Cabrera put forth an admirable effort in left field last season, another full-time experiment with the MelkMan diving and sliding feels as foreboding as seeing Adam Eaton crash into walls in center field.

Some things just yield better results when not left up to chance.

With that said, here’s a short list of players you can expect the Sox to have on their radar for the remainder of this off-season:

The Sox desperately need to get stronger defensively and the lineup could benefit from a few more table setters.

Daniel Murphy: earned himself a nice payday with his surprisingly productive 2015 post-season just in time for free agency, but let’s avoid the urge to prorate his playoff numbers, as Murphy won’t be banging 30+ home runs anytime soon for an entire 162.

Murphy could easily do damage to the tune of 20 home runs and 25 doubles in the launching pad, which would sit nicely in the middle of the Sox batting order. Moreover, as a player now entering his prime at the age of (30) and coming off the highs (thanks to the Cubs) and lows (thanks to the Royals) of post-season play, perhaps Murphy has exactly the type of confidence and fire in his belly the White Sox need to help bring back the swagger to the South Side.

Asdrubal Cabrera: with his career .974 fielding percentage, he is the definition of a steady glove man who would blend in well into the Latin clubhouse culture of the White Sox. Cabrera won’t put forth prodigious numbers at the plate, but his stick is also pretty steady  and would sit nicely in the lower third of the Sox lineup. Cabrera is a notorious Sox-killer best known for his earlier work with the Cleveland Indians where he amassed a pair of all-star seasons and top-20 MVP placement in recent years (2011-12).

The Sox desperately need to get stronger defensively and the lineup could benefit another speedster. Notice a trend?

Adam Eaton is always one attempted web gem gone bad away from an extended DL stint, so to avoid a regression in the outfield next season, the White Sox are best served sliding Melky into a DH/part-time outfielder role and moving Avisail Garcia over to left field full time to make room for a plus production outfielder who can help sure up the defense AND free up some lineup flexibility.

Jason Heyward: went from all but forgotten on a deteriorating Atlanta squad to becoming the standard for outfield production in the new post-steroid era that once again now places more emphasis on defense and saving runs. The J-Hey Kid played stellar defense at all three outfield positions for the Cardinals last season, while posting a nice comeback season at the plate, where he batted .290 and nearly slobbed (OBP% + SLUG%) .800.

Expect the bidding to go long and deep for Heyward’s services which means the dollar signs will be large, maybe even record-breaking, but the fact remains that Heyward has yet to reach his ceiling given his age (26) and many experts liken his trajectory to that of the 1980’s/1990’s era outfielder, Andy Van Slyke —  who like Heyward, was also a dynamic five-tool player who broke the bank (relatively speaking) as an outfielder when he cashed in with the Pirates in 1991.

The conversation for free agent outfield acquisitions should start and begin with Heyward, but in case the White Sox don’t land Heyward a backup plan of equal magnitude should be in place.

Permanent residency has alluded the annually shopped Justin Upton, but perhaps he can find a home on the southside. Having amassed steady production and a multiple all-star nods over his young career, Upton has completely emerged from behind the shadows of his older, Melvin Upton Jr. to represent the family well in the big leagues.

The word amongst MLB insider circles is that the younger Upton can be had from San Diego for the right price (code for “pitching”).

If the Sox have one thing, it’s pitching depth, and one of the best in the business in terms of grooming younger arms in pitching coach, Don Cooper. Perhaps the time has come to move a still serviceable John Danks who would benefit from pitching in the milder weathers in Southern California. A combination of Danks and an emerging arm, along with a few younger prospects, should be enough to net Upton.

Keep warm this winter by staying close to the Hot Stove.

Follow Regal Radio on Twitter @regalradio1 and on Facebook under Regal Radio; Sean Terry is a co-founder of We Are Regal Radio and host of WARR’s The Varsity Show