The high-flying Chicago Blackhawks are one victory away from hoisting Lord Stanley’s Cup after defeating the Lightning in Tampa 2-1 in Game 5 of the Stanley Cup Final Saturday night and taking a 3-2 series lead.

Coming into this critical Game 5 both teams held distinct advantages: the Hawks held the edge in experience, including a 41-14 record in Games 4-7 under coach Joel Quenneville, while the Lightning held home ice advantage.

During the opening period, the Hawks put their pedal to the medal as best as they’ve done this series, controlling the action right from the start. The Hawks peppered shots on starting Lightning goaltender Ben Bishop, who was making his first start since Game 3, testing the likely still-injured stoppers’ endurance early.

With the aggressive approach, the Hawks took advantage of an obvious Lightning miscue when Bishop tried to clear the puck off to the side of his goal only to get pushed over by his own defenseman, Victor Hedman. In the midst of the confusion, Hawks sniper Patrick Sharp got a wide-open shot on goal and made hood, at the 6 minute, 11 second mark to give Chicago a 1-0 lead. 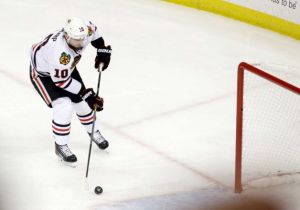 John Raoux/AP
Chicago Blackhawks left wing Patrick Sharp knocks the puck into an open goal for a score against the Tampa Bay Lightning during the first period of Game 5 Saturday night.

As the first period continued, Lightning forward Nikita Kucherov skated on a breakaway attempt and charged into Hawks goalie Corey Crawford, hitting the side of his head onto the goal post as he fell through. Kucherov left the contest there after and didn’t return.  The dominating opening period by the Hawks was clearly their best period of the Finals series — and perhaps the entire playoffs — it included a 14-5 shots on goal advantage.

Tampa was down at this point, but they were far from out. The second period saw the Lightning regain their edge and it paid off when Valtteri Filppula scored his fourth goal of the playoffs (10:53) off a textbook pass from Jason Garrison to tie the score at 1-1.

Chicago stayed patient during the middle frame, despite being outshot 12-8, and in goal Crawford kept the Men in Red in the game with several key stops. The final period saw the Hawks regain control and capitalize two minutes in when Kris Versteeg broke into open ice pass the Lightning defenseman and delivered a beautiful pass to Antoine Vermette who netted home his fourth goal of the playoffs, giving the Chicago the 2-1 lead and the ultimate advantage they’d need to steal this game.

Tampa Bay kept a sustained rush to try and tie the game once more, but were turned away each time by Crawford.

The Lightning finished the final period with a the shots on goal advantage of 15-7  without a potential tying goal to show for it. Bishop, in spite of the tough start, rounded his game out with a gritty effort and kept Chicago from ever dominating the contest, he finished the contest with 27 saves and a .931 save percentage. The Hawks tested Bishop from the opening faceoff and it was clear that Bishop was limited in his mobility but he still kept his team in the game with his heroic play.

There should be no complaints from Hawks fans after the performance that Crawford displayed in a vital road victory in a hostile environment. Despite giving up the one goal in the second period, Crawford was locked and loaded on this evening, stopping 31 of 32 shots while posting a save percentage of .969. If the last two games from Crawford is any indication of things to come, the Hawks should be very confident heading to Game 6 with a chance to close out this long and challenging effort for the Cup.

Unsung heroes for Game 5 included the Hawks fourth line of Marcus Kuger, Andrew Shaw and Andrew Desjardins, which combined for a total of 7 shots on goal. The fourth line brought energy and toughness in keeping Tampa’s top scoring lines at bay while creating extra scoring chances that helped Chicago dictate action on the offensive end. The Hawks defensive game plan was outstanding overall, resulting in a total of 18 blocked shots and 11 takeaways. Once again Chicago also dominated the face-off wins stat to the tune of a 36-26 edge.

A Look Ahead To Game 6

Saturday’s win set up a great and historic possibility for this next game: for the first time since 1938, the Hawks have an opportunity to win the Stanley Cup on home ice. Experience will be the key once more to knockout the Lightning because the fourth game of any seven-game series is the hardest to win.

As they’ve proved time and time again in this run of championships, pressure is nothing new for the Hawks and it seems as if when more of it is in the air, the team rises to the occasion. Tampa goalie Ben Bishop, meanwhile, hasn’t held up well as the pressure of this series has increased. 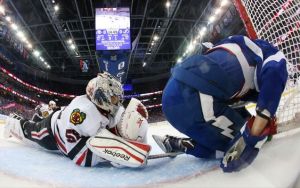 The main question entering Monday’s contest is does Tampa coach Jon Cooper stick with Bishop in a elimination game on the road or will he go back to Andrej Vasilevskiy, who has been more consistent in this series but never has been in such a situation in his career? More along those lines: will Nikita Kucherov be available to return after his head injury after colliding with Corey Crawford and will Steven Stamkos finally score a goal or two to jumpstart the Lightning offense?

The Hawks clearly played their best game from start to finish in Game 5 but can they do it again with the enormous pressure that will be placed in front of them, performing in front of their fans and a rabid hometown anticipating a celebration?

Past experience says yes but Tampa knows it can win in Chicago as well and it knows with one solid performance it can take can take all momentum away from the Hawks while applying no extra pressure on their side while sending this series back to South Florida for a potential Game 7.

Will the Hawks win their third Cup in six seasons and form a priceless memory on United Center ice or will the Lightning give an inspiring performance and force that most tantalizing of sports situations: a Game 7 in a championship series? The way this series has gone, we fans shouldn’t expect anything less than the best from these two squads. BUCKLE UP!