Lightning finally struck on time and on target for Tampa Bay as the Men in Blue delivered in the clutch to defeat the Chicago Blackhawks 4-3 in Game 2 of the Stanley Cup Final, tying it at 1-1 as the series shifts to Chicago for the next two games.

After blowing a 1-0 lead in Game 1 and staring down a potential 0-2 deficit while Chicago held a lead mid-way though Game 2, the Lightning showed resilience and frankly outplayed the Hawks late much in the same way Chicago owned Game 1’s third period.

Things started out well for the Lightning, they came out on fire in the opening period with Cedric Paquette electrifying the hometown crowd with his second goal of the playoffs, 12 minutes and 26 second into the first to give Tampa Bay an early 1-0 lead.

The Hawks were aggressive offensively in the 1st period — unlike in Game 1 — and tallied 11 shots on goal though none hit the back of the net. Things started to turn in the second period and at 3:04 into the middle session, Andrew Shaw delivered his fifth goal of the playoffs off a wrist shot, tying the score at 1-1. Mr. Turbo, aka Teuvo Teravainen knocked him his 4th goal of the playoffs and second of this series on the power play (5:20), off a terrific pass from Marian Hossa to put Chicago ahead 2-1. 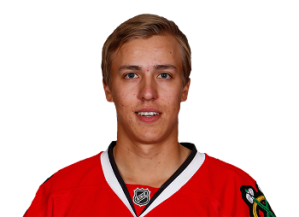 With more time to afford it after falling behind, as opposed to Game 1, Tampa Bay did not back down as Nikita Kucherov netted home his 10th goal of the playoffs (6:52) off a tip-in and got the scored tied once again.

The breakout star of this year’s playoffs, Tyler Johnson, stepped up to the plate at this time, scoring his 10th goal of the playoffs at the 13:58 mark and the Lightning took a 3-2 lead into intermission.

Would the Lightning learn their lesson from Game 1 in not taking their foot off the pedal It didn’t look that way right away as t he Hawks struck first in the final period courtesy of Brent Seabrook making good on a slap shot to tie the score at 3-3.

Things looked all the shakier for the home team during the third as Lightning goalie Ben Bishop had to leave the game twice with an apparent injury while backup Andrei Vasilevskiy impressively held down the spot in net.

Eventually, the Hawks self-destructed during the final frame with Patrick Sharp committing two costly penalties. The second Sharp penalty turned against Chicago as Jason Garrison scored his second goal of the playoffs (8:49) on the advantage, giving the Lightning the final advantage and the game its final score. With defensive coverage breakdowns and a lack of clearing away pucks from the Hawks, Tampa Bay took advantage of open ice and created multiple scoring chances while the Hawks were playing on their heels pretty much from the second period on.

Inconsistent play from relatively inexperienced defensemen Kyle Cumiskey and David Rundblad didn’t help the cause Saturday, do not be surprised if a change is made in Game 3 in favor of rookie Trevor van Riemsdyk who brings energy and skill to the lineup. The only good things that Hawks fans can take away from the Game 2 loss is the goal scoring, the team dominating the face-off wins category (35-19) and scoring on the power play for the first time in this series.

It was not a good day at the office for either goaltender. Corey Crawford struggled in net throughout the game, stopping just 20 shots while posting a .833 save percentage. The defense did not help Crawford’s effort, but there were at least two questionable goals for Tampa that should have been routine saves.

On the other side, Bishop was exposed in more ways than one, stopping 21 of 24 shots and posting a save percentage of .875. Leaving the game twice in the third period didn’t help matters for Bishop and it awakened many to the idea that Vasilevskiy could be an x-factor as a reserve over the course of this series.

In all, the Lightning rode the wave of momentum they built for themselves early in Game 2 and played with a sense of urgency to grab an important victory.

A Look Ahead To Game 3

As the United Center welcomes the sure madness to come in Games 3 and 4, the Hawks have to look at the Game 2 loss as a missed opportunity in which they self-destructed in critical moments and failed to play a complete game.

The Lightning held serve on their home ice and now has re-gained confidence going on the road knowing that all they have to do is win one game at the United Center to possibly give themselves an advantage in the series as a whole.

Chicago must take charge and set the tone right from the opening whistle Monday night and help from the fans (even with Tampa rooters welcome) should do a world of difference. On the other bench, Tampa Bay must continue to bring the aggressive action to their offensive game, matching their strong defensive style and continuing to cause problems in front of Crawford.

Will the Hawks control the pace from the word “go” or will the Lightning take advantage of their first chance on the road this series and take its lead? Game 3 should be fast-paced and intense as this series is quickly becoming entertaining and maybe more unpredictable than originally thought.