Credit: MCDAAG/Golin
A meeting of the big men: McDonald’s All-Americans Diamond Stone and Caleb Swanigan go at it during Wednesday’s contest.

As the McDonald’s All-American basketball games have set-up indefinite shop in Chicago its allowed the city to solidify itself as a hub for prep basketball and a draw for those who like to follow high school stars.

Following the high school game in Chicago ensures that you will come across the work of Camron Smith. A former standout at Gordon Tech, Smith transitioned from his hoop dreams at Southern Illinois University and started on his path to becoming one of the most promising sports broadcasters in the Midwest, one you can now see many nights anchoring for CBS 2 Chicago. 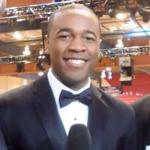 When he isn’t anchoring, Smith is doing special reports for Comcast and developing his game as a in-game commentator for WCIU, his work rooted in following the best boys and girls hooping in the Chicago area. When the All-American games come around Smith gladly gets to broaden his scope, he’s covered all five of the McDonald’s weeks that have come here since 2011, so he knows the event inside and out.

Here you can get his take on this year’s contests, which brought around stand outs such as Ben Simmons, Jaylen Brown, Isaiah Briscoe, Cheick Diallo, Katie Lou Samuelson, Te’a Omari Cooper and Malik Newman (all among Smith’s picks for his favs this week).

Also, don’t forget to check out Camron on “The D & Davis Show” this Saturday at 11:20 a.m. as he gives more on the McDonald’s games, the Final Four and plenty more. D & Davis runs from 11 to 2 pm every Saturday on Chicagolandsportsradio.com.

1. What do you think gets to the heart of what makes the McDonald’s All-American Games such a special event?

Credit: MCDAAG/Golin
The combined McDonald’s All-American boys roster at the Ronald McDonald House in Chicago this past Sunday.

A lot of people believe the game is what this event is all about, but the heart and spirit of the MCDAAG is giving back to charity through the Ronald McDonald House visit. The players experience a heart warming day with children and families going through difficult health situations. All that takes place before any basketball practices, scrimmages or games.

2. Did Jalen Brunson live up to the standard set by other Chicago-area talents in this game in recent years and how do you think he stands to make an impact on the college level?

Jalen lived up to the standard by being selected into the prestigious MCDAAG, that’s an accomplishment in itself. He’s now in the same conversation as any MCDAAG player that’s come out of Illinois.

When he arrives at Villanova, Jalen will make an immediate impact — he’s mature, he’s a leader and a dynamic point guard that makes the game easier for everyone around him. Jay Wright and his staff got a great talent to lead their program for the next 3-4 years.

3. How big of an impact do you think Diamond Stone will make on the Big Ten next season?

Diamond Stone will thrive at Maryland because he’s going to play with a great point guard in Melo Trimble that draws a large amount of attention with his scoring ability. Diamond is a big body with a soft touch around the rim, he’s also capable of knocking down mid-range shots.

4. How many more years do you see Chicago hosting the MCDAAG?

Hopefully, Chicago continues to host the MCDAAG! It’s a great city that produces the best basketball players in the world. The basketball history in Chicago runs deep on the high school, college and professional level. The MCDAA players love the city during their time here and feel honored to play inside of Michael Jordan’s house (the United Center).

5. Who, if anyone, from the Chicago area preparing now for their high school senior season could we see playing in this game next year?

I can see Nick Rakocevic playing in the MCDAAG next year, but he’ll need to perform well during the AAU season and in his senior season at St. Joseph. He’ll get a ton of attention next season because the Chargers are coming off an (Illinois High School Association) 3A state title, he’s the best player in the class of 2016 in Illinois.