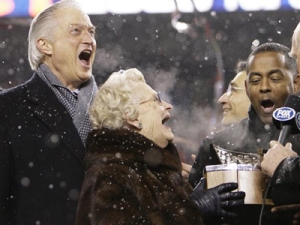 Associated Press
Virginia McCaskey and her son, Michael, accepting the George Halas award for the NFC Championship back in 2007. Ma McCaskey has to be fearing that she’ll never again receive the trophy named after her dad.

It is of no surprise that the 2014 Chicago Bears would go down as the kind of team to make a modest, kindly old woman start cursing and foaming at the mouth due to their lame play.

As it will forever stand, the Bears put together a series of performances this season that made them look comparable to a Red Hat group in regards to toughness and durability, so to get word from the team’s matriarch, 91-year-old Virginia McCaskey, that everyone needs to get off their duffs and bring her a winner during Monday’s burial proceedings made a whole lot of sense.

Early Monday, as we first got word of the firings of general manager Phil Emery and head coach Marc Trestman, if any credit was to be given it would have gone to team president Ted Phillips and chairman George McCaskey, that was the case on this website via Ken Davis. After all, they are the recognized faces of the front office, but George let us know what the business really was in a press conference later in the day.

As transcribed by the Chicago Tribune:

“She’s been on this Earth for eight of the Bears’ nine championships, and she wants more. She feels that it’s been too long since the last one, and that dissatisfaction is shared by her children, her grandchildren and her great grandchildren. She’s fed up with mediocrity. She feels that she and Bears fans everywhere deserve better.”

At this point in her life, Ms. McCaskey isn’t going to be on the front lines of the battle for respectability in the name of the franchise that has given her and her family their life of leisure and long-held reputation, but no one in the franchise could offer the perspective she can. She’s freaking George Halas’s daughter, after all.

You’d figure she’s been giving Trestman the stink eye (and that old lady stink eye can be powerful), maybe even before this site did and though George’s quote portrays her as a reliable source of support, I wouldn’t be surprised if Virginia’s fire to initiate this week’s changes has burned highest and for the longest time.

With 91 years past her, Virginia McCaskey has to feel the reduced draft of more than a few windows closing on her. As we approach 30 years since the last time her franchise could legitimately call itself the best in the world, the once brightest window in her hall of memories has to be as dim as ever.

Ma McCaskey would likely make any decision about the Bears’ future based off emotion and retrograde belief, not anything else that tends to plague the “smarter-than-thou” types who tend to earn NFL front office jobs. Don’t know how much of a good thing that would be, but she may work better as a divining rod for managerial talent than the for-hire Ernie Accorsi. I’d damn sure trust Virginia moreso than Jay Cutler, who’s already pushing his guy Mike Shanahan to the top of the Bears’ re-tread list.

The Bears would do best to carefully explore re-treads like Shanahan and Rex Ryan while taking more seriously their chances with top-notch, winning pro assistants like Darrell Bevel and Todd Bowles or even top coaches at the college level. I’d actually put Shanahan at the top of the ex-NFL head coach list in spite of his disastrous run as coach in D.C., but his main demerit is being recommended by Cutler.

If the Bears go after a coach primarily to appease Cutler and if they hire such a coach — or if they first hire a GM with that plan in mind — then this organization will have proved that they’ve learned nothing from the past five years. Yes, Cutler’s perceived comfort with the next person in charge should be a concern — the Bears will have to try and get as much out of Cutty as possible if they decide to keep him — but in no way should he be an adviser in this process, in no way should he be placed at the level of stakeholder, he has sacrificed that right.

Cutler is being paid as a franchise player but he has made every effort in his time in Chicago to disprove that opinion and thus should not be given any further chances to be coddled or buddied up to, he’s merely an employee of the Chicago Bears Football Club at this point.

Sometimes working for a guy you hate can be a galvanizing force, maybe it would be the one thing that would snap Cutty out of his morose tendencies — he can’t get it up enough for the guys he sees across the field, maybe he needs to have an enemy kept closer to him. No one else on the team really has the killer instinct and despite her great quote, I don’t think Ma McCaskey could keep up the fight as long as we’d need her to.

Ask the last truly successful QB-coach combination this town has seen if everything needs to be buddy-buddy at Halas Hall for success to take root.