Michael Walton II writes about the NBA for We Are Regal Radio.

Michael is a student, freelance writer and burgeoning high school basketball scout based in Chicago. He’s previously been published in TrueStar Magazine, the Redeye Chicago and thelyricallab.com.

Caught between the fervor of the FIBA Basketball World Cup and the start of football season, I finally gave myself a chance to wrap up my NBA division outlooks, focusing on the moves made during this off-season by each franchise in the Association.

We are approaching the start of NBA training camps, and coaches are starting to get ideas about their rotations and team philosophies moving forward. I recently have been reading Jack McCallum’s excellent book “Seven Seconds or Less: My Season on the Bench with the Runnin’ and Gunnin’ Phoenix Suns,” and the tell-all book really sheds light on just how important the relationships are between the coaching staff and the players.

In honor of my current read, I will talk about the moves made by each team in the Pacific Division while framing them with each team’s respective head coach. As usual, I rank the teams in the order in which I think they will finish next season.

The Clippers had an excellent season last year, securing a three seed and making it to the Western Conference semi-finals amidst all the Donald Sterling controversy. The Clippers lost quite a few players this off-season, but they reloaded by adding depth at almost every position.

Doc Rivers came in last season and tried to bring some of his strong defensive principles from Boston along to LA. His vision was for the Clippers to continue using their up-tempo offense, but to also have a strong, sound defense centered around DeAndre Jordan’s rim-protection. Rivers made sure to keep veterans Hedo Turkoglu and Glen Davis due to their contributions (specifically on offense).

AP Photo/Duane Burleson
Which direction will the Los Angeles Clippers head this season? Doc Rivers may be more sure than he shows here after a busy off-season.

The offense was even further improved with the addition of Chris Douglas-Roberts, who last year showed that he can actually contribute (12 point per 36 min, career-high 38.6 percent from the 3-point line) on a winning team in Charlotte.

Spencer Hawes was a hot-commodity for any team that thought they were close to a title, but he somehow ended up on Cleveland pre-LeBron’s return. Now Hawes joins the Clippers and provides something they were missing — a floor spacing big man.

And Rivers’ final addition, Epke Udoh gives them a defense first big who can give them a different look. With a capable back up for Paul (Jordan Farmar) and depth to help keep Blake Griffin and Jordan healthy, there is no reason this team shouldn’t be competing for a title next season.

The Phoenix Suns were the surprise of the NBA last season; the Suns great year was rightfully attributed to new head coach Jeff Hornacek. The Elmhurst native was runner-up to Gregg Popovich of the Spurs in league Coach of the Year voting, and many (including this writer) thought Hornacek should’ve won. The Suns started the season firmly in what many people considered a “rebuilding period but Hornacek didn’t treat it as so and kick-started what could be a new era of winning basketball in the desert.

Hornacek continued the Suns tradition of fast-paced offense, his squad finished in the top ten in both pace and effective field goal percentage and he was able to get young players who had previously underachieved to play up to their potential. This group includes Gerald Green and the Morris twins — Marcus and Markieff. The Suns were eliminated from playoff contention during the last week of the season and this season they are looking forward to a legitimate playoff run.

The Suns ended perhaps the biggest saga left in the NBA’s summer by signing Eric Bledsoe to a five-year, $70 million extension that may seem dangerous now, but could payoff later. For one, while Bledsoe is now one the highest-paid point guards (bigger contract than Steph Curry, Ty Lawson, Kyle Lowry, etc.), his deal will seem more reasonable as the league’s salary cap increases considerably over time. And two, signing Bledsoe now gives the Suns the deepest backcourt in the NBA.

The Suns also signed former Sacramento Kings standout Isiah Thomas and Zoran Dragic, the younger brother of 2013-14 Most Improved Player Goran Dragic. This deep rotation that will also include Green and the Suns are sure to simply run many teams off the floor with their intriguing mix of speed and playmaking. At the same time the Sun are one of the weaker defensive rebounding teams in the league, yet they mostly ignored this. They lost jump-shooting big Channing Frye, but they replaced him with Anthony Tolliver (41% 3pt last season).

At the end of the day the Suns will continue to push the pace as Hornacek instructs, but I believe their excellent guards will finally put them over the hump and they will make the playoffs. Remember, this team won 48 games last year and now the core has year of experience with their coach which gives them a slight edge over the next team on this list.

It is widely agreed that Steve Kerr is a great basketball mind, he has held two of the most important jobs in the NBA as general manager in Phoenix and now head coach in the Bay. What is yet to be seen however is how Kerr’s version of the triangle offense will mesh with the Warriors current roster. Last season the Warriors had the rare distinction of finishing in the top ten in offensive pace (6th) and defensive efficiency (3rd). Kerr may slow the pace down, and that alone will be the most interesting part of this union.

The best example of a triangle offense team would be the legendary 72-win  Chicago Bulls from 1995-96, whose pace of 91.1 would easily make them the slowest team in today’s NBA. While the ‘96 Bulls were obviously built for the slow-it-down ‘90s, it will be fun to see if Kerr tries to simplify the triangle to give it more quick-hit options.

The Warriors only made a few moves, and they were all focused on keeping star Wardell (AKA “Steph”) Curry healthy for the stretch run. The Warriors added Brazilian veteran Leandro Barbosa, Shaun Livingston and (once again) Brandon Rush. Barbosa’s speed has declined, but he is still among the fastest guards in the league.

Livingston had a productive season last year with the Brooklyn Nets, proving he could handle backup point guard duties for a contender, especially in the postseason, where his height and the slower tempo helps his game tremendously. And Rush has already had one stint with the Warriors and comes with a versatile game that Kerr will make use of.

The Warriors finished with only three more wins than the Phoenix Suns last year, and this season I think they will flip-flop positions, with Golden State just barely missing the playoffs. However, Klay Thompson’s rapid improvement could derail my prediction.

Last year was one of the worst in Lakers history, and this was mostly due to a rapidly aging core, which includes mega-star Kobe Bryant, who missed most of the season due to injury.

However the public seemed to heap all of the blame onto former LA head coach Mike D’Antoni despite the fact that many of the players on the Lakers roster didn’t fit his system. They still tried to run D’Antoni’s system and finished with the second highest pace in the league but also the third-worst defensive efficiency. 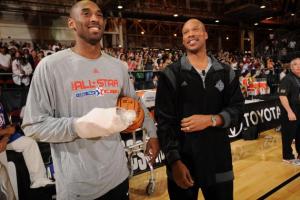 Andrew D. Bernstein/Getty Images
Byron Scott’s “tough” style will need to meld with the always-demanding Kobe Bryant if the two are going to lead the Lakers back to the playoffs.

This resulted in a 27-win season and left the Lakers searching for options. The LA brass hopes the answer to their problems is new head coach and former Showtime Laker Byron Scott.

Scott said he promises to instill ‘toughness’ into his team, but is yet to be seen how much toughness will actually improve the Lakers dreadful defense.

The Lakers were very active this off-season despite failing in their delusional chase of top-tier free agents. They drafted a beast at the power forward spot in former Kentucky Wildcat Julius Randle, but they put a giant question mark on his place on the team by signing underrated forward/center Ed Davis and Carlos ‘the scapegoat’ Boozer.

This worst part of this crowded frontcourt is that it only includes a few defensively inclined players (Davis and Jordan Hill). The Lakers retained most of their athletic swingmen (Wesley Johnson, Nick Young, Xavier Henry), but let a few guards walk because of them acquiring the costly contract of Jeremy Lin.

On paper, the Lakers have one of the more interesting roster make-ups in the league but unfortunately, these players don’t specialize in defense, and defense is what the Lakers need desperately (notice how I didn’t even mention Kobe Bryant’s role on the team?). I think Scott will do just enough to prevent this team from finishing dead-last in the Pacific.

The Kings are one of the most depressing teams to write about, they have great uniforms and fans, but sometimes their roster moves are just confusing. Mike Malone is an excellent coach though, he is a Popovich disciple who holds his players accountable. Malone’s no-nonsense attitude will be key to the Kings’ long rebuild.

The Kings’ main positive last year was their top-five rebounding rate, which measures how effectively your team hits the boards. Their main negatives were a dead-last assist ratio and a terrible defense. The assist ratio just highlights how bad of a passing team the Kings are, their passing won’t be helped with the departure of Isiah Thomas to a division rival, but they did make moves to try to shore up the point guard spot, signing veterans Darren Collison and Ramon Sessions, but neither is known as a defensive stopper.

With all of the great point guards that have passed through Sac-town it is ridiculous that they didn’t hold on to any of them. Retaining Rudy Gay can be looked at as a positive, but perhaps the biggest news for the Kings is just how great DeMarcus Cousins looked on Team USA.

If “Boogie” can keep his composure for a full-season and actually commit to trying on defense, there’s no limit to how good the kings can be but in reality this team just doesn’t have the pieces to compete in a top-heavy Pacific division.