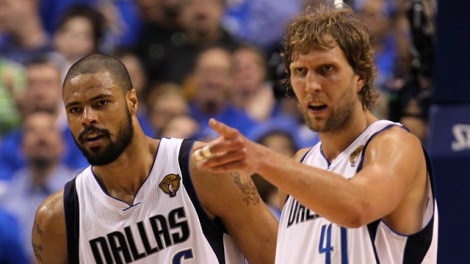 Ronald Martinez/Getty Images
The reunion of Tyson Chandler and Dirk Nowitzki in the Dallas front court, last seen in 2011, is part of a successful off-season for the Mavericks.

Michael Walton II writes about the NBA for We Are Regal Radio.

Michael is a student, freelance writer and burgeoning high school basketball scout based in Chicago. He’s previously been published in TrueStar Magazine, the Redeye Chicago and thelyricallab.com.

After summing up the free agency moves that have shaken up the Eastern Conference, it is time now to digest the movement that took place in the Western Conference. I will start with the division of the NBA Champion San Antonio Spurs, the Southwestern Division. This division is intriguing because it is one of the most brutal in the league.

Four of the five teams in the Southwestern made the playoffs last year, each pulling in at least 49 wins. These five teams made moves to try to position themselves for title contention, and because of all the changes we could see the standings in this division look completely different next year.

The end goal for everyone involved in the NBA is for your team to become a dynasty, but doing so takes creative management, an excellent coach, and the involvement at least a couple truly transcendent players to enter the legendary group of dynasties the league has had. Those with extensive basketball knowledge know that there are very few true dynasties: the late 1940s/early ’50s Minneapolis Lakers, the ’50s/’60s Boston Celtics, the  Celtics and Lakers of the ’80s, the 90s’ Chicago Bulls and the Lakers and Spurs of the 2000s.

To join this illustrious group, your franchise has to have a great present day outlook with an even better long-term one. I will rank the Southwestern teams in the order in which I think they will finish next season, along with the dynasty whose team-building model I believe they are most reminiscent of, with varying degrees of success of course.

Mid-way through this new decade (10s?), the San Antonio Spurs are emulating themselves to a tee. Gregg Popovich is a coach who sets the tone early and often — since taking over the Spurs in 1996 he has won five NBA titles, doing so by adapting his team’s playing style to what’s most successful in the league at the time. With general manager R.C. Buford along side him, Popovich has found the role players who could surround stars Tim Duncan, Tony Parker and Manu Ginobili to great success. Now that new Finals MVP Kawhi Leonard seems to be headed towards superstardom, both the Spurs’ present and future outlook couldn’t be brighter. With that being the case, the Spurs followed up their latest championship run by making sure their off-season was boring, as usual.

Along with quietly re-signing Boris Diaw, Tim Duncan, Patty Mills and Matt Bonner, the Spurs also gave Tony Parker a three-year contract extension. And with all that good will from knocking off the Miami Heat still in the air, ESPN still projects them to finish second in the West.

It is possible that the world will never understand that the Spurs organization is run as efficiently as they shoot the basketball and that they will continue to dominate the NBA year after year until proven otherwise.

To the casual reader this comparison may seem far-fetched, but it really does make sense. Those early Minneapolis Lakers teams were built around the talents of a big man whose skill-set was unique when he came into the league. Sound familiar? The Dallas Mavericks have been using Dirk Nowitzki as their foundation since 1998, just as the Lakers did with George Mikan back in the day. The Mavericks had the poor luck of being one of the teams to lose a lot this off-season: Vince Carter, Shane Larkin, DeJuan Blair, and Jose Calderon have all joined new teams, but the Mavs actually retooled their roster impressively.

Adding Richard Jefferson, Jameer Nelson, and most impact-fully, Chandler Parsons through free-agency should make Dallas more explosive overall. The Mavs also re-signed Nowitzki and lightning-quick guard Devin Harris and they did all of this while acquiring vital 2011 Mavs championship member Tyson Chandler back from the New York Knicks and in one of the more underrated deals of this summer, the Mavs acquired uber-athletic forward Al-Farouq Aminu, his addition will help shore up the teams’ defensive issues while offering up plenty of “small-ball” lineup opportunities.

Nowitzki probably won’t win seven titles like Mikan, but his impact on his franchise will be just as lasting as Mikan’s was with his. 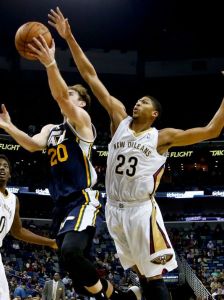 This one was fun because it didn’t take as much stretching as it seems like it would. The Boston Celtics dynasty that ruled the early NBA was built through the talents of the original shot-blocker supreme: Bill Russell. The 21-year old Chicago native Anthony Davis led the NBA last year with 2.82 blocks per game, but due to his era he is being asked to be a much bigger force offensively and he’s been delivering on that end. Last season, Davis averaged 20 points and 10 rebounds per game by scoring a variety of different ways, suggesting that he will end up a much more prolific offensive player than Russell could’ve ever dreamed to be.

One of the other cogs in the great early Celtics dynasty was the dazzling guard named Bob Cousy, who helped define the position. And while there isn’t much here in terms of player comparison, Jrue Holliday is one of those players who is underrated and hasn’t even scratched the surface of his potential. The 24-year-old is a one-time all-star and his development could sync up with Davis’s to give the Pelicans a formidable inside-out duo.

As far as this off-season was concerned, New Orleans didn’t make many moves. The Pelicans let a bunch of players walk, which is fair considering their 34-win record. They have at least seemed to acknowledge that to win in today’s NBA you need outside shooting. They signed Jimmer Fredette, who I believe is excellent and just hasn’t received the proper playing time to make an impact. The Pelicans also re-signed Darius Miller, a career 35 percent 3-point shooter. The lack of off-season moves is concerning in the ever-busy NBA, but with AD’s rapid development and a young core I don’t believe that 49-wins is out of reach for this squad.

The Houston Rockets have been preserving cap-space for years to lure big-name free agents, so this comparison was easy. The Lakers of recent generations are clearly what Houston GM Daryl Morey is aiming for.

Morey has crafted a successful team through the incredible talents of an offensive-minded wing and the exploits of a physically-dominating big man. James Harden and Dwight Howard are basically a (very) poor man’s version of Kobe Bryant and Shaquille O’Neal. The Rockets won 54 games last year by effortlessly out rebounding and outscoring their opponents, the only thing the they are missing is a coach with the reputation of Phil Jackson and established role players to do the dirty work on the court.

So far Kevin McHale hasn’t shown very encouraging signs of being the long-term fit as head man in Houston. He was visibly displeased with Howard at times last season and McHale has also failed to put together an offense that contains anything more than a few basic sets. The bench has a long way to go also. After losing young experienced players such as Omer Asik, Jeremy Lin and Chandler Parsons, the Rockets responded by adding young talent in hopes that they fill those players’ roles admirably.

Troy Daniels played well enough last year to warrant being resigned and Ish Smith and Joey Dorsey each provide depth at the guard and forward positions. The biggest move made by the Rockets this off-season was the signing of Trevor Ariza, who showed signs of life in Washington for a surprisingly good team. Ariza is a better defender than Parsons was and he has more of a reliable outside shot, he is also much older than Parsons but he played for the Rockets four years ago so there is a hope that he gets re-acclimated quickly.

In the end Houston continues its cycle of letting players — young players — walk in an attempt to get their own “big three.” And I think next year their long-term vision may cost them a playoff spot.

The Memphis Grizzlies have had great playoff success as of late, making it as far as the Conference Finals in the 2013 season. This roster has stayed competitive and thrived through tough defense and the tremendous efforts of a team-first point guard in Mike Conley, exactly how the Boston Celtics were built in their second dominant decade. The savvy acquisitions of Robert Parish and Kevin McHale sent the Cs to the top of the Eastern Conference while they were there.

Since the Grizzlies let Rudy Gay walk in 2013 they have missed his offense at the 3, a drastic advantage in favor of the old Celtics — meanwhile, Memphis has been trying to fill their go-to offensive void to no avail. This year the Grizz hope they have found the answer in…Vince Carter?

Carter is aging but he still provides a scoring punch. Last year, at 37 years old he averaged 17.6 points per 36 minutes and could conceivably start at the 3 spot next year. Memphis also re-signed Beno Udrih to help preserve Conley, which helps their long-term future. Re-signing Zach Randolph is also a much-welcome move simply because the Grizzlies cannot suffer anymore losses in the front-court after losing promising big man Ed Davis to the Lakers.

Ultimately I think this team will see a huge drop-off next year, and truthfully this Celtics comparison was the nicest thing I could do for a passionate team that may be coming to the end of their run together. More like ’92 Celtics than ’82.

2 responses to “NBA: Free Agency Notebook — Big Things Going On In The Southwest”