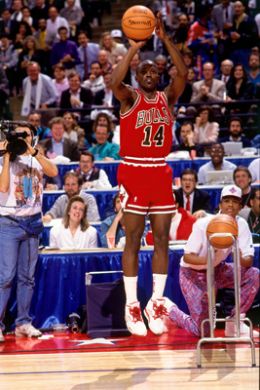 Andrew D. Berstein/NBAE/Getty Images
Chicago’s own Craig Hodges letting them go during his legendary win at the 1991 3-point contest during All-Star Weekend.

ed. note — Sidney Brown is known as the go-to guy for hockey info on Regal Radio, but what you may not know is that he has quite the encyclopedic brain for all sports. In “Sid Ranks Em’ All” you’ll get to read his unique take on the best and worst of sports with specific lists spanning all playing fields.

Throughout the years, the 3-point shot has become a weapon unrivaled in the game of basketball with its only competition being the slam dunk.

Famous for extending leads, stopping opposing team’s rallies and of course, game-winning shots, the arc of 3-pointer grabs viewers of the game with anticipation and its final result can raise a fan to the heights of the rafters or sink them below the floorboards.

Chris Ford of the Celtics welcomed us to the era of the 3-pointer by making the first one in the pro game in October 1979 after it was first installed for the ’79-80 season. Since then some of the best players in NBA history have used this shot to enhance their games and entrench their legends, be it Larry Bird, Mitch Richmond, Reggie Miller, Ray Allen, Paul Pierce or Seth Curry.

As experts, pundents and fans we always talk about who’s the best but that often turns into a conversation of who’s most popular and in the process we can forget about the unsung heroes. For any number or reasons — lack of longevity, inconsistency, lack of team success around their individual brilliance — underrated talents exist all throughout the NBA’s history, especially when it comes to lighting it up from beyond the arc.

These players on my list are guys I feel must be recognized and held to a high standard of being the best among their particular periods in the League. You may have forgotten about or maybe never even heard of a couple of these guys depending on your age but they all made an impact that should never be lost and should be respected.

5) Dale Ellis (1984-2000) — This 6-foot-7 small forward/shooting guard could light up a scoreboard with the best of them and with his quick release, he made teams pay for leaving him wide open. In 1987, as a member of the Seattle Supersonics, Ellis led the league in 3-point attempts with 240 and in 1989 he shot a career best 47.8 percent while finishing second in 3-point field goals made with 162.

In the 90’s Dale continued his consistent shooting from the 3-point stripe and in 1998, in his return to Seattle, he led the league in 3-point percentage at .464%. For his career, Dale finished with 1,719 shots made from long range and is currently 10th all-time in 3-point baskets made. FUN FACT: Ellis finished second in the 3-point shootout behind Larry Bird in the 1988 NBA All-Star Weekend in Chicago.

4) Glen Rice (1989-2004) — This sharpshooter was considered a can’t-miss talent coming out of the University of Michigan after winning the National Championship in 1989. Upon being drafted by the Miami Heat, it didn’t take long for Rice to warm up. In 1992 with the Heat, Rice finished second in the NBA in 3-point baskets made with 155 while shooting 39%.

In 1995, Rice shot 41% from 3-point land and finished 10th in the league in scoring with 22.3 points per game. After being traded to the Charlotte Hornets in the mid 90’s, Rice had a coming-out party not just as a shooter but as a scorer as well, he led the league in 3-point percentage that year (47%) and came in third in 3-point baskets (207). After being traded to the Los Angeles Lakers in 1999, his career came full circle and he became a champion again.

During the Lakers championship season in 2000, Rice shot 36% from 3-point range and in the playoffs that year he shot 41% from downtown, providing an added threat on top of the one-two devastation ofShaquille O’Neal and Kobe Bryant. Rice is currently 16th in NBA history with 1,559 3-point field goals made. FUN FACT: As 1997 NBA All-Star Game MVP, Rice scored 26 points and  hit 4-of-7 from 3-point range, 20 of those points coming in his record-setting third quarter.

3) Dan Majerle (1989-2002) — “Thunder Dan” came into the NBA as an unknown prospect and was booed on draft day. The late president and long-time coach of the Phoenix Suns, Cotton Fitzsimmons, made a declaration to the fan base stating that Dan would become an important piece to the franchise and that the fans would regret booing him. It seems that Cotton saw the vision early on and the rest of the basketball world was in for a surprise.

Majerle continued the sharp-shooting 1994, leading the NBA in 3-point field goals made (192) and attempts (503) while shooting 38% from downtown. After signing as a free agent with the Miami Heat in 1996, Majerle has his best year with the team in 1998, shooting 37% from long range, he also stood out in the 2000 playoffs with a 40% showing overall.

2) Craig Hodges (1982-1993) — A Chicago-area native and  journeyman out of Long Beach State University, Hodges made his mark in the NBA not long after entering the League. In 1986 as a member of the Milwaukee Bucks, Hodges led the league in 3-point percentage at 45% and repeated the feat in 1988 (49%) after being traded from Milwaukee to Phoenix.

Hodges bounced once more to his hometown team, the Bulls, midway through the 1989 season, playing 49 games while shooting 42% from 3-point range. During the 1989 playoffs, Hodges led the NBA in 3-point field goals made (35) and attempted (88).  As the Bulls climbed the ladder into championship contenders, Hodges remained a key role player, shooting 48% from long distance in the ’89-90 season and he’d soon establish himself as the new 3-point King at all-star weekend.

In 1991 at the ASG weekend in Charlotte, NC, Hodges made a record 19 shots in a row in the 3-point shootout which he of course won, the second of three straight contest wins. Adding more resonance to his career was his performances in the Bulls’ early championship runs. In the ’91 playoffs, Hodges shot 39% from long distance and in ’92 shot 45% from the long stripe as Chicago won its first back-to-back titles.

Hodges finished with only 568 3-point baskets made but he had a major impact in helping the Bulls become one of the premier teams in the NBA. FUN FACT: Was fifth in free throw percentage in 1987 (89%) but he shot better than 90% in each of his final three seasons.

1) Drazen Petrovic (1989-1993) — Selected in the third Round of the 1986 NBA Draft out of Croatia, Drazen was known as one of the best shooters in Europe and ahead of him he would help the former Yugoslavia and Croatia each win silver medals in the 1988 and 1992 Olympic Games, but “Petro” made his greatest impact in his short but brilliant NBA run.

In his rookie season in 1990 with the Portland Trail Blazers, Petrovic shot just under 46% from 3-point land in 77 regular season games and got to see the Finals as the Blazers advanced but lost to the defending champion Detroit Pistons. Overall, Petrovic had trouble adapting to NBA life and continuously fought for playing time in his second season. Freedom finally came in January of 1991 when he was traded to the New Jersey Nets where he would receive much-needed minutes and agrow as a player.

In 1992, Petrovic came of age in his first full season with the Nets, playing all 82 games and leading New Jersey to the playoffs while shooting 44% from downtown and averaging 20.6 ppg. In 1993, Petrovic’s game continued to expand, he shot 45% from 3-point distance while averaging 22.3 ppg. His hot shooting and scoring ability took the NBA by storm and made him one of the original pioneers of European players making their mark at the highest level in America. Petrovic’s life was unfortunately cut short in the summer of 1993 when he passed away in a tragic car accident. As a fan of his, Petrovic’s fading legacy is the reason why I made this list.

If it wasn’t for his untimely death, what would Petrovic’s career have been, what place would he see within the pantheon of great Europeans and great NBA players period? Would he be seen as the best European player ever to play in the NBA? We will never know, but I do know this and fans should keep this in mind, today’s foreign players, with the likes of Dirk Nowtizki, Serge Ibaka, Manu Ginobli, Tony Parker and Pau Gasol would not have had the room to exist as they do in the league if not for the trail that was laid down by the early European players like Petrovic.

Petrovic finished his career with 255 3-point baskets made and a .437 career 3-point field goal percentage, his impact was made on the court for a brief time but his legacy and trail-blazing play should be remembered and upheld forever in NBA history.

FUN FACTS: Petrovic was a third-team all-NBA selection in 1993, he currently fourth in NBA history in career 3-point percentage (.437) .  The story of Drazen Petrovic was one of the main influences of made a documentary released in 2010 by ESPN for their 30 for 30 called Once Brothers, the movie was produced by his fellow countryman Vlade Divac.

Now that you’ve read my list, who do you see as best in your opinion? Is my list fair or foul? Let us know here at WARR. As we as fans, media experts alike, we all have our thoughts and opinions, so let’s debate!