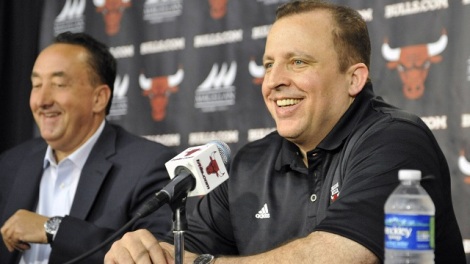 David Banks/USA Today Sports
How natural will the smiles on Gar Forman and Tom Thibodeau be during their post-draft press conference?

Chicago Bulls fans, by and large, refuse to be hoodwinked, bamboozled, run amok or led astray.

It’s draft night and to look across the internet landscape one sees plenty of longtime followers of the team — professional writers, bloggers, commenters, etc. — offering reasons why this off-season is already (or at least potentially in the eyes of the somewhat fair-minded) shaping up to be another sad example of how the Bulls never seem to have unqualified success at this time of year, even in the years like 1999 and 2010 when it seemed like the possibilities were endless.

2014 is another one of those years — much of the cream of the current NBA is available either for trade or outright signing and a long heralded class of college underclassmen and international players are ready to hear their names called above the din within the Barclays Center. Where do the Bulls fall within all that? So far, the franchise and its followers have seen Aaron Afflalo — a sure bet earlier this week to slide into the Chicago starting 5 at 2-guard — come and go…a big hurt? No, Frank Thomas…

Afflalo would have been a welcome addition to the Bulls’ roster, but it would seem that his coming to Chicago would have likely shut out the possibility of landing a big fish here, which is what this off-season should really be about? There’s no reason to think that this isn’t still the mind state of Bulls upper management. If anything, the news of Afflalo’s return to Denver may just mean that the Bulls are without one less clutch they could lean on in their pursuit of Carmelo, Love, LeBron or whoever the hell else they want this offseason.

As it was put by Tom Zeller of SB Nation in a well-thought response to today’s news, Afflalo may not have been worth what everyone expected him to be in the open market, and the deal that wound up being made can’t be judged by imaginary deals that we come up with. In actuality it was likely the only deal that made sense, not only two Orlando and Denver but in the league at large.

More deals are to come, and one very well may include the Bulls: Doug McDermott, Nik Stauskas and Marcus Smart have all been mentioned as late lottery-type picks who could fall to the team if they do a little rising. Personally, I like the idea of getting two of the three (McDermott being a distant third among the bunch) if the Bulls mostly flip their two picks (Nos. 16, 19) and little else into a spot in the No. 8-12 range.

While such a trade may make for a more encouraging headline than should the Bulls stick with their two picks as designed, the only move they could make that would put a large amount of people over the moon would be securing Kevin Love tonight, don’t bet on it though. As explained with some decent math by CSN Chicago, the Bulls not only have suitors in Golden State to compete with but many see Denver as a possibility now as well due to the Afflalo trade. It’d be hard to see Minnesota pull a trigger tonight when more potential leverage is to be gained. 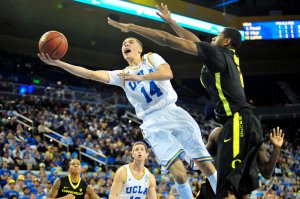 Gary A. Vasquez/USA TODAY Sports
Polished but underdeveloped UCLA guard Zach LaVine could be an outside possibility for the Bulls at 16

And if you believe in “the enemy of my enemy is my friend”-type dealings, maybe you’d root for the Bulls trading with the Miami Heat, who seem to be hot on the trail of Shabazz Napier, the Tribune’s K.C. Johnson has that as a possibility. Of course, some, could see Napier coming to the team himself. Napier is a hell of a competitor, but if I was to see the Bulls stand pat I’d rather see them go with other big-time college program talents such as Adreian Payne or Rodney Hood (though I’m sick of Dukies, outside of Jabari) or even James Young, who’s natural athleticism could help him make an impact in spite of a motor that still needs developing.

You may want to take a quick peek at the foreign players’ profiles too before its too late, you don’t want to get thrown off by the pronunciation of a Jusuf Nurkic at 19, which Aggrey Sam is expecting to see.

These two picks the Bulls have clearly have less value on their face than they did years ago so to see them essentially give one away (for the near future at least) at a Euro project shouldn’t hurt too much but again, it doesn’t stimulate the imagination as much as tickle it.

Just off the top, here are the top five results I can imagine from tonight’s potential wheelings, dealings and tradings:

1. Bulls trade up (Sacramento, Philadelphia and Charlotte could all be open for business), get Stauskas or Smart and turn back all focus on nabbing Carmelo.

2. Bulls stand pat, get some sort of combination of Payne, Hood or maybe even UCLA’s Zack LaVine or N.C. State’s T.J. Warren. The Boston Globe’s Gary Washburn has Payne and Hood going to the Bulls with the other two picked in that same range. Turn back focus on nabbing Carmelo.

3. Bulls giving up whatever is needed outside of Joakim Noah and Taj Gibson and getting Love (only third because of its lack of possibility, though it would be the greatest result).

4. Bulls trading up and getting McDermott. Although I don’t like his ability to create his own shot on the NBA level, he could still be a decent scorer on a good passing team who would allow him to have space to spot up and do his thing or at least attack on the high post while shooting over mismatches. Bulls could be that team. Then turn back focus on nabbing Carmelo. (*update* — Bulls traded No. 16 and 19 picks to get McDermott, who originally was taken at No. 11 by Denver. A future 2nd rounder was also offered)

5. Bulls reach for any combination of Napier, Tyler Ennis, Young or Europeans in their designated spots. I like Young better than the points because I’d rather the Bulls get a guy in the Nos. 2, 3 or 4 spots but Napier and Ennis are both guys who would be able to acquit themselves well in the League in the right situation. You know what the last sentence is going to be.

Yeah, the Bulls aren’t a bad situation for a rookie right now as long as you know that you’re not a star any longer and you won’t be for the time being, you’re going to be a cog in a team that needs to win sooner than later, or maybe fodder for a trade for a more established talent, bringing us back around to the real theme of this off-season for this team — bring back an All-Star or don’t waste our time. If they luck into a future all-star, we won’t be likely to know it within the next 24 hours.