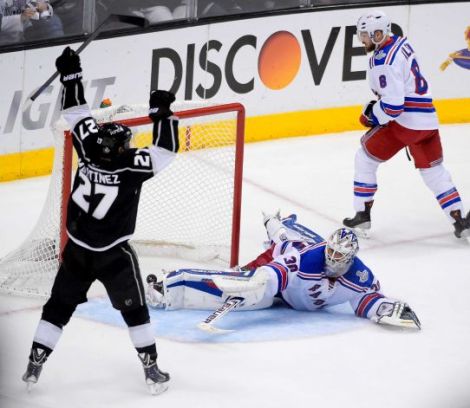 In an instant classic, the Los Angeles Kings dramatically won their second Stanley Cup in three years, defeating the New York Rangers in Game 5 of the Cup Finals by a score of 3-2 in double overtime late, late Friday night.

Game 5 started off fast for the home team as Justin Williams netted home his ninth goal off the playoffs off a backhand shot at 6 minutes, 4 seconds into the first period, giving the Kings an early 1-0 lead and giving the Staples Center its first sign of celebratory excitement on the night.

With L.A. controlling the pace, the Rangers were down but their desperation to continue their season kept them far from out. In the second period, momentum shifted to the road team as Chris Kreider (15:37, power play) and Bryan Boyle (19:30, shorthanded) scored two unanswered goals and gave the Rangers a 2-1 lead heading into what at the time was expected to be the final period.

With a tight-checking game brewing, the Kings took advantage again as Marian Gaborik scored his 14th goal of the playoffs on the power play at 7:56 to tie the score at 2-2. Behind their offensive push, the Kings held a 29-15 advantage in shots on goal and sent the third game in this series to overtime, the first two being Games 1 & 2 — each games where L.A. fell behind for a time and wound up stealing the night.

The first extra period witnessed multiple scoring chances from both sides, with pucks hitting posts and fatigue plaguing both squads but nothing came about on the scoreboard. In overtime playoff hockey it is always sudden death, one goal ends the game, so hardly anything in sports can match the intensity of an OT competition in hockey — even in an lopsided series such as this you’d have a hard time figuring out who has the advantage in the moment.

As each moment stacks upon itself in OT, only one question sticks in the viewers’ head — who will be the hero this time?

As the second overtime commenced, we got our answer in Kings defenseman Alec Martinez, who wrote his name into the history books as he delivered the game-winner off a wrist shot (14:43) coming from a sweet pass from Tyler Toffoli, locking the Kings in as 2014 Stanley Cup champions.

LA — The famed “That 70’s Line” of Jeff Carter, Tyler Tofoli and Tanner Pearson came together again and scored one assist each.

NYR — Brad Richards and Carl Hagelin came away with one assist each.

NYR — Stars Martin St. Louis and Rick Nash didn’t show up in this all-important game, neither man scored a point.

Hail To the Champions

The 2012 Los Angeles Kings earned a record for leading each series 3-0 on their way to their first ever Stanley Cup 2012 and experts called it remarkable at the time. Turn the page two years later and their story will go down as one the most memorable paths to a title in NHL history and for almost exact different reasons.

In overcoming a 0-3 deficit to defeat the San Jose Sharks, surviving a tough Anaheim Ducks team in the first ever L.A. Freeway Series in the playoffs after trailing 3-2 and then knocking out the defending Cup champion Chicago Blackhawks. the Kings this year became the first team to ever win three road Game 7s in one postseason in NHL history.

It was only in the Final where L.A. held the home ice advantage and they used it effectively and efficiently in downing the New York Rangers in five games. Though the series ended that quickly, we did still see three overtimes, including in instant classic in Game 5.

Regardless of if they were playing ahead or down, the Kings showed the hockey world that they were a completely different team from 2012, with a balance of offensive skill to complement their strong defensive style, their style is built for the playoffs and complete with the grind and grit that it takes to win a Cup.

Give credit to Kings President and general manager Dean Lombardi for making the key move at the trading deadline of picking up Marian Gaborik from the Columbus Blue Jackets which paid off huge dividends on their way to the 2014 title. For Hawks fans reading this post, if you’re sick to your stomach with the feeling that it should have been your team celebrating back-to-back cups, I understand your pain — I believed that the Hawks would have beaten the Rangers if they would have taken care of business against the Kings.

Still, the Kings proved to be the better team and they deserved to win Lord Stanley’s Cup this season.  What the Kings did this season should provide a hunger and a much different focus for the Hawks next season. Yes, Chicago still has to worry about its own division featuring potential contenders in St. Louis, Minnesota and the upstart Colorado Avalanche, but to return to the Stanley Cup Finals next year it looks like the road will go through the Kings.

With the Kings and Blackhawks meeting in the past two Western Conference Finals and each team winning one series a piece, this could become a new premiere rivalry for these teams and the NHL in general. As the 2013-14 season becomes history, the NHL has a lot to look forward to as you can honestly say that at least 10-15 teams look like they can win it all, its a competitive yet not necessarily watered-down brand of parity, much like that the NFL thrives on.

With stars like Patrick Kane, Jonathan Toews, Sidney Crosby, Henrik Lundqvist and Alex Ovechkin at the head of franchises in big cities, the NHL has never been in better shape than right now and coming off the first season of the revamped format of the playoffs, I would call that experiment a success.

Every team, including the Hawks, now have work to do in order to overtake the Kings in 2014-15. Will the Kings repeat? Will the Blackhawks return to glory in 2015? Will an upstart young squad make noise to take the Cup? We’ll all find out those answers and a lot more when the 2014-15 season gets under way.