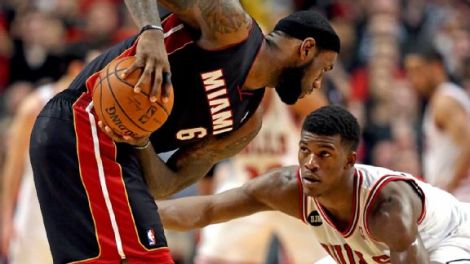 If there was one prideful (yet painful) thing to take from the Chicago Bulls’ eventful 2013-14 season it was that the team could guard opposing offenses to the death, and they did that exactly.

That the eventual death was classified as D.L.O. — Death by Lame Offense — could undercut the good feelings regarding the defense. That the Bulls had night-in and night-out the best set of defenders in the game certainly wasn’t enough for the Bulls to be a championship contender, but it was enough to ensure two spaces on the NBA’s All-Defensive teams, as announced earlier this week.

Paired with Joakim Noah’s victorious moment in being named the NBA’s Defensive Player of the Year earlier this offseason, the announcement of Noah on the first team, his second straight year in that position, and Jimmy Butler earning his first all-defensive selection on the second team is a pleasant bit of post-Blackhawk elimination news.

Noah, as expected, led all players in first team votes (105) and total points (223) and Butler earned 103 total points in voting while also receiving 29 first team votes, so maybe he’s not far off from a future spot among the top-5 defenders in the league. With this duo at the front line, the Bulls held opponents to a .430 field goal percentage in the regular season, second-best in the league and the Bulls held opponents to a league-leading 91.8 points per game.

Out of all 10 selections to these teams, only LeBron James and the San Antonio Spurs’ Kawhi Leonard remain to show off their defensive prowess further as the NBA Finals begin this Thursday. It should be noted that second-teamer James has been left off the all-defensive first team for the first time since 2009 after making the squad five consecutive years.

For more on LeBron, Leonard and the rest of the combatants in this year’s Finals, stay with WARR and Michael Walton II, who will offer his preview of the Heat/Spurs series prior to Game 1.