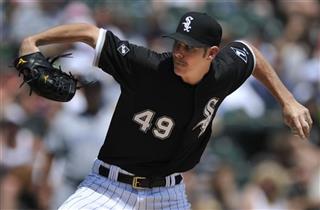 WARR baseball writer Kevin Luchansky writes about the Cubs and the White Sox weekly for WARR.com.

The White Sox limped into June losing two in a row to the lowly San Diego Padres in this weekend’s series, but bounced back nicely today with a Sunday afternoon masterpiece from Chris Sale.

The lefty threw a complete game two-hitter en route to a 4-1 victory, using just 100 pitches and striking out nine Padres batters. With the win, Sale improved to 5-0 on the season with a 1.59 earned run average.

In eight starts this season, Sale has allowed just two home runs and perhaps more impressively, he’s only walked eight batters. With his outing today, Sale now leads the MLB in WHIP with a 0.60 mark. To limit damage time and time again, a pitcher has to make sure he’s not giving out free passes, and there aren’t many pitchers that better limit their walks per nine innings than Chris Sale.

Over the few series, there aren’t many hitters in baseball hotter than third basemen Conor Gillaspie, who is hitting .500 over his past 24 plate appearances. Gillaspie is hitting for a little power now, too, though he still doesn’t have any home runs to show for it. In his last five games, Gillaspie has collected four doubles and scored twice and drove in two to pair with it.

On the season, Gillaspie is now hitting .351 and has an on-base percentage right at .400, which is a vast improvement over his 2013 figures. For the most part, Gillaspie has been providing the damage against right handed pitching, which is excellent to see for a young left handed hitter that will face many more right handers over the course of his career than he will lefties. Eleven of his 13 doubles and 16 of the 18 runs he’s driven in have come against rand handers, with a .373 average to go with it. Still, his .281 average against lefties is nothing to shake your head at.

Not to be out-shined at the plate is Alexei Ramirez, who is also on the north side of a .400 average over the past few games. In three of his past four outings, Ramirez had himself a two-hit game, raising the season average to .329, good for second best in the majors among shortstops. Ramirez sits behind only Troy Tulowitzki in average, who himself is having in All-Star season, and even with just half of Tulowitzki’s 14 home run total, Ramirez leads the runs batted in category 37-36

Checking In on Eaton

Adam Eaton’s return to the lineup hasn’t been exactly pretty, but it’s good to see the outfielder getting his at-bats before a tough stretch over the next three series when the White Sox travel for three with the Dodgers in LA, three with the Angels in Anaheim, and then return home for three against the division leading Tigers.

Still, the defensive presence of Eaton has already been felt, and you fully expect a player that heads to the disabled list this early in the season to struggle a bit at the plate in their return, as he had only seen roughly a month and a half of major league pitching before going down.

Luckily for the rough stretch of games mention just above, the White Sox will be able to plug Jose Abreu back into the lineup, as general manager Rick Hahn noted he will be activated from the disabled list on Monday. Abreu has been sideline since May 18th with ankle tendinitis, but still leads the team in home runs and runs batted in with 15 and 42 respectively.

The timing couldn’t be better, as these nine games are not only against quality opponents, but post outcome, they could start to shape the intentions of the front offices plans come the All-Star break and eventually, the trade deadline. At 29-29, the Sox are five games back in their division and trail the Angels, Orioles, Yankees and Rangers in the Wild Card race.