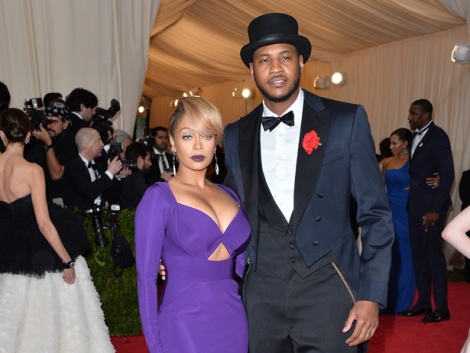 George Pimentel/WireImage
Carmelo Anthony and LaLa Anthony attend the “Charles James: Beyond Fashion” Costume Institute Gala at the Metropolitan Museum of Art on May 5.

Standing alone or intertwining, in recent years this phenomenon of movable culture pieces have illuminated new light and acquired greater weight. More and more, black entertainers from different industries have taken to hooking up and forming power couples, pairings whose combined income and revenue-generating potential complement one another in the most lavish of ways and help guarantee a greater relevance and fluidity across the many categories of pop culture.

Rich, wildly successful and at the eye of the multimedia storm, these couples now represent the culmination of reaching the pinnacle for black families: a rapper with an R&B singer, a NBA player with a WNBA player, a professional baseball player with a business representative for Adidas — all cases of men upgrading women and vice versa.

So much for aspiring for a simpler, low-key quality of life like the Huxtables –- today’s generation wants money, success and the spotlight all at once. I’m of the Cosby Show generation, but as much as I cringe at times when I think about how much our television influences and role models have evolved, the truth and proof is in the pudding.

In less than two months, the Jay Z and Beyoncé experience will descend upon Chicago as part of that uber-couple’s “On the Run” summer tour, hopefully they’ll be in peace and not in pieces (guessing Solange doesn’t make the trip).

Jay and B: the epitome of a young black power couple, will be here in the flesh for full consumption. Rumors have been that  tickets are starting at something like $400 — remember, you’re paying for two now — if that in fact is the case (it’s not, of course), the fact that it could be somewhat believable speaks volumes on just what space that duo occupies in society today.

Call it the power of product, supply & demand, or whatever other term from your macro-economics textbook you choose, the bottom line is the show will sell, people will pay to consume, and we will love it!

The Jay and B experience holds little rival in the entertainment industry, but their existence helps create an appetite for more Y.B.P.C.s, so much that another Brooklynite has his chance this summer to take center stage and entrench himself, along with his actress and reality TV star wife, to another level of fame and relevance, and they just may do it in the Windy City.

No, we’re not talking that Madison Avenue, either. We’re talking about where its real in the field, the West Side, Chicago, U.S.A. (and actually its a street.)

You see Chicago Bulls fans, not all bad comes from another lost season from Derrick Rose. In the process of carrying the 2013-14 Bulls on his back, Joakim Noah has managed to wrangle the bull by it’s horns (pun intended) and usher in a new cultural era for the Bulls, one where he is a primary draw for other talents to go to the ‘Go and where recruiting elite level players is actually a good thing, a needed and missing element in the past.

This summer’s recruitment of the NBA elite by the Bulls franchise could be unique thanks to Noah and the many documented stories alluding to Noah’s outreach to Melo and weekly updates as early as February. It may seem a little indirect and far-fetched, but you can tie in the large, monumental shift in black culture (Y.B.P.C.) with the Chicago Bulls’ cultural shift, its new-found relevance in the Rose-Tom Thibodeau (and now Noah) era, a relevance that has waned since its peak prior to Rose’s injury issues but still exists.

There are powers here and bringing in another such power to consolidate would lead to a new level of success for this city and that organization that went unrealized in the wake of Miami forming its dream team and putting itself on a path for a possible 3-peat to be clinched this June. Bulls Nation figures it could have been us in that position, maybe it still could be.

While they’re no Jay and Beyoncé in terms of wealth and success, Melo and his leading lady, La La, certainly hold their own weight as a Y.B.P.C. — each having carved out early achievement in their respective entertainment sectors. Melo has been a sports star for over a decade now, a one-year college phenom at Syracuse and a consistent all-star upon coming into the NBA, arguably the best player in the league who has yet to reach an NBA Finals series.

La La, meanwhile, took the MTV VJ to TV guest star to supporting movie actress path with greater success than anyone this side of Bill Bellamy, and while Bill probably couldn’t get VH1 to take his calls today, La La has a show there that manages not to set back black woman weekly and still get decent ratings. 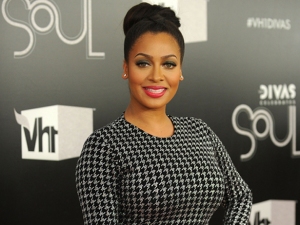 Both Anthony’s have benefited off being “NYC people” and they are one of the most visible couples in our country’s most visible city. To make a decision to leave all that, it wouldn’t be a decision about loyalty for the Anthonys, it would be about opportunity, an opportunity factoring in more than Melo and his professional basketball legacy.

Bigger than just numbers on the stat sheet, Team Anthony has a true opportunity to create and expand a lifestyle brand – one that would create sustained generational wealth while also influencing a city that is ready to embrace them both with open arms.

Ripe with opportunity and centrally located, Chicago gives Team Anthony the best of both worlds.

For Melo, a player still in his basketball prime, choosing Chicago gives him the opportunity to join a team ready made for success. Chicago puts Melo in prime position to chase legacy dreams, rings and banners – and it’s not every day that a player in his prime gets a chance to pick his own direction.

Think about it: Chicago offers a chance to play for a coach that is among the top-5 in the game, a chance to play with fellow New Yorkers in Noah and Taj Gibson (if he’s not discarded in order to make a Melo acquisition work) who have adjusted well to the Chi and a chance to play with a former MVP in Rose who after the last two lost seasons has to realize he needs you as much you need him.

Speaking of primes, La La, 34, is arguably far from hers in the realm of the broadcast arts, just ask Oprah.

The Queen of TV started her career in Chicago at 30 and by 33 she surpassed Donahue as the most beloved holder of a fully syndicated, self-titled show. Oprah saw beyond any limitations Chicago may have had in comparison to New York or Los Angeles as a media center and forged her own empire regardless. In the time since, Chicago has ripened as a constant source of daily television stars and also now hosts the ongoing productions of several large movies a year and every NBC show with our city’s name in the title (Fire, PD, etc.). 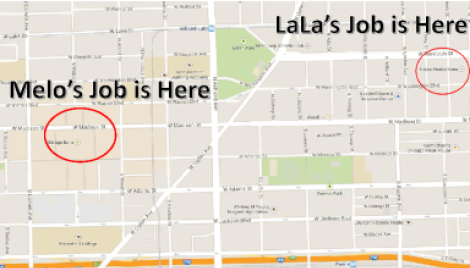 Money will still be plentiful for Team Anthony as well. The $120 million-plus that the Knicks can offer Melo to remain in basketball purgatory pales in comparison to what Chicago can offer the entire fam collectively. $90 million isn’t too shabby a starting point for Melo, who just happens to be the top current player endorsing the Jordan shoe line.

Resurrecting the house that MJ (another one-time Brooklynite) himself built just smells like big time endorsement money to me. No need to stop there, though.

Mere blocks away from the United Center (and its new state-of-the-art practice facility being erected across the street), a nearly-vacant Harpo Studios sits idle after being abdicated by the Queen. The next big hit from Chicago can still be made there.

Arguably, the day-time torch in the city has been handed to Steve Harvey, but he doesn’t occupy the same dominance O did on any level, there’s a mantle that awaits for another set of hands to take and mold it. The opportunity to resurrect the house that Oprah built smells as much like money as Melo’s possible legacy journey.

To be groomed and follow in the path that Oprah forged — entrenching a TV legacy for the next several years at least, while Melo helps reel off any number of titles in what, quite frankly, is the best basketball city in the country from NBA success down to the high schools steadily producing the next pro stars, sounds like a helluva ride to me.

You may want some sort of extensive facts and figures on their current income for me to overstate the obvious — it doesn’t matter what they may leave in New York cause its obvious that Chicago is a land of opportunity for this promising Y.B.P.C.

Come to Chicago, receive the baton from two of the greatest to do anything here, grace us with with your presence and energy, win championships and ratings, be rich and successful, line the Kennedy, Stevenson and Dan Ryan expressways with billboards featuring your smiling faces.

And when it’s all said and done, look back at your respective and collective legacies and know that it was in the “second city” where the Anthonys became the best they could be.

Sean Terry is a co-founder of Regal Radio and co-hosts “The Varsity Show,” which you can follow on Twitter @varsityshow1.

2 responses to “NBA: Chicago is Trending for Carmelo and La La Anthony”