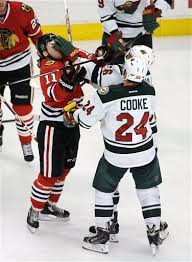 Associated Press
FIGHT! — The natural antagonism between the division rival Blackhawks and Wild will be on display in this coming series.

As the Chicago Blackhawks and Minnesota Wild prepare for their second round Stanley Cup Playoff series, now would be a good time to look back on the similar roads these familiar divisional foes took to get here.

Chicago overcame an 0-2 deficit and a physical pounding to defeat the Blues in six games. Youthful Minnesota, in its first winnable playoff test, battled back in spite of its fatigue and inexperience and wound up exploiting those same traits in its opponent, the Colorado Avalanche, who it overtook in seven games, winning Game 7 on the road in overtime.

This year’s match is a rematch from last season’s first round showdown where the Hawks prevailed in five games, but this season the Wild look more mature and battle tested while the Hawks in the past week have hit their stride, winning four in a row and playing some of their best hockey this season.

Minnesota took three of five games from their Central division rivals during the regular season, but the playoffs are a different story. Will we see the same story as last year? Do the Wild have a chance to push the Hawks to the brink or even possibly pull off the upset? Let’s breakdown the matchups.

Blackhawks — Led by the familiar cast of characters (Jonathan Toews, Patrick Kane, Patrick Sharp and Marian Hossa), in the playoffs Chicago’s role players have also took on the serious role of stepping up and helping decide games. Bryan Bickell made a name for himself in last year’s playoffs and continued his postseason legacy in the Blues series, leading the team in hits and scoring a total of three points (2 goals,1 assist).

Bickell’s presence was also felt in creating traffic in front of goalie Ryan Miller while setting a tone physically in the open ice. Expect Bickell’s role to be at the forefront in this series. Andrew Shaw turned his play around in the latter stages of the Blues series after committing a series of dumb penalties early in the series. Shaw collected four points in the opening round (2 goals, 2 assists) and just maybe he’s got the message that disciplined play will keep him on the ice and out of the penalty box. Ben Smith only has two points (1 goal,1 assist) in the playoffs but his play hasn’t gone unnoticed. Smith has been a staple on the fourth line, shutting down the opposition’s top lines while contributing on the offensive end, being aggressive at shooting at the net.

Wild — Lead by Zach Parise — who leads the team in playoff scoring (3 goals, 7 assists) –, Dany Heatley, Matt Moulson, Mikko Koivu and Jason Pominville. Parisecan explode at any time, creating scoring opportunities not just for himself but for his teammates. The veteran Heatley has been through wars in the Stanley Cup Playoffs and with his leadership and scoring (1 goal,4 assists), expect him to help set up Parise and company for scoring.

Acquired at the trade deadline, Moulson brings additional help in the scoring department, though his playoff stats don’t show it yet (1 goal,1 assist). Moulson’s scoring must trend upwards if the Wild will have any chance of upsetting the Hawks. Pominville is also expect to contribute offensively and with his five point total in the Avalanche series (4 assists), his play can also stand to improve and part of that would include causing confusion in front of Hawks goalie Corey Crawford.

Blackhawks — Brent Seabrook and Duncan Keith lead the pack and stand a chance to shutdown the Wild’s top two scoring lines. Keith leads all Hawks defensemen in scoring (2 goals, 5 assists) and his all round play should continue to be an impact. Seabrook’s return to the lineup in the series clincher against St. Louis added an edge to the Hawks’ defense that was noticed right away. Nick Leddy, Michal Rozsival, Niklas Hjalmarsson and Johnny Oduya will be matched up against the Wild’s second and third lines and will have to limit their scoring chances and clearing out pucks in front of Corey Crawford.

Blackhawks — By now all criticisms of Corey Crawford should cease. Crawford absolutely was the difference in the latter half of the St. Louis series, his stats speak for themselves (4-2 record/1.98 Goals Against Average/.935 Save Percentage). Crawford’s play in the Game 6 clincher against the Blues, led by 35 saves, is just the kind of goaltending a team needs in the playoffs and I expect it to continue against the Wild, no worries from me.

Wild — Injuries in net have hobbled the Wild all season. Trade deadline addition Ilya Bryzgalov was expected to be the guy in net but he’s struggled in the playoffs with an 0-2 record, though he received a second chance in Game 7 against Colorado when then-starter Darcey Kuemper was injured in the third period and ended up with the win.

Before Game 7, Kuemper was solid with a 6-3 record on the season including a 2.03 Goals Against Average and a .913 Save Percentage, helping neutralizing the young Colorado attack. If Kuemper can’t go in the Hawks series, Bryzgalov will be net despite his past playoff struggles but whoever is in net for the Wild, they’ll have a tall task in keeping the high-flying Hawks in check for as many as seven games.

The casual fan may think that the Hawks would dominate the stat sheet when it comes to these categories, but NOT SO FAST! The Wild had to do some things right in upsetting the higher-seeded Avalanche, while those of us who know the Hawks well know of the team’s ongoing special teams issues. A closer look at the numbers in the playoffs so far:

Both teams clearly have momentum coming into this series with the Hawks winning their last four games to eliminate the Blues and the Wild upsetting the upstart Colorado Avalanche in a thrilling seven-gamer.

Last year’s series was ho-hum, more or less a revving up for the Hawks in their latest Stanley Cup run, the eventual champs winning in five games while playing down to the competition at times. In the time since, the Wild have upgraded offensively and still are a solid defensive team. The Hawks can roll out four lines and play at any style so they should intend on using whatever style is needed to set the tone in play and not give the Wild any hope of wining this series.

The rest the Hawks have had, not having played since Sunday while the Wild will be playing on a normal schedule with only one whole day in between its Game 7 at Colorado and Game 1 in Chicago. Fatigue could be an issue in these initial games for Minnesota so Chicago should be on the attack.

The Wild have made large improvements as a franchise, winning a playoff series for the first time in 11 years (2003 vs. Colorado), but they do not have the depth or skill to match the Hawks pound for pound. This series should be over in short order.

My Prediction: Blackhawks in five.

The Road Ahead (Series Schedule)

Anaheim over LA Kings in seven

Pittsburgh over NY Rangers in six
Boston over Montreal in six

One response to “NHL Playoff Preview: Stanley Cup Chase Getting ‘Wild’er for Blackhawks”