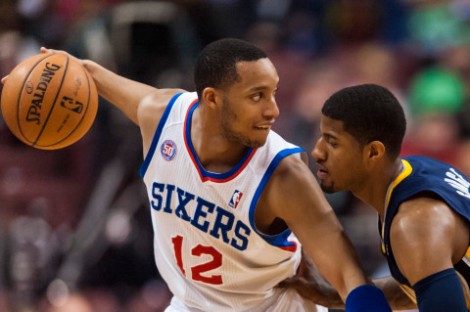 Howard Smith/USA TODAY Sports
Former 76er Evan Turner posts up his new teammate, Paul George, in a recent battle with the Indiana Pacers. Turner doesn’t have that problem anymore after being swapped for Danny Granger today.

It’s not that hard to judge trade deadlines.

Mix in a few recognizable names being exchanged with teams we expect to see in the postseason and you got something.

Thing is, this latest NBA trade deadline, which came to fruition yesterday afternoon, was looking pretty weak up until Indiana and Philadelphia’s at-the-buzzer swap between Evan Turner and Danny Granger (interior player Lavoy Allen was also involved and headed to Indy).

Some would say the deadline was still weak, mostly because of those who didn’t get moved and also because prior to the Turner/Granger trade the biggest moves was Philly (in full dump mode) sending Spencer Hawes to Cleveland and Steve Blake being sent from the Lakers to Golden State. Here’s a full list of the deadline trades, full is used for lack of a better word.

Unfortunate thing about those trades: of the four teams mentioned only one is a playoff team right now, one other maybe could make a final lunge at the eighth seed. As for the players — Hawes and Blake are respected professionals (though I suspect Hawes is much less respected off the court) but they both need a shot of Monstar aura in order to do anything in a game that captures our attention.

That’s not the case with Turner and Granger though, the two players seem to be at intersecting points of their respective careers and this trade reflected that: Granger is older and overpaid, once at the center of the nucleus for a team on the rise who wound up finding itself in his absence and later found out that it could leverage him for a younger boost in talent in Turner.

You can argue that Turner isn’t much, if any, of an upgrade from Granger and that this trade could upset a delicate chemistry that has helped Indiana progress to being the current No. 1 in the Eastern Conference but you’d be wrong and misguided.

Turner hasn’t lit up the NBA like you’d want a No. 2 overall pick (2010) to do but he’s been more than serviceable in a franchise that hasn’t done much right beyond him, the Chicago native also has playoff experience and he’s simply more productive at this point, scoring 17.4 points a game, bringing down six rebounds and offering nearly 3.5 assists a game (per 36 minutes those numbers bump up to 17.9, 6.1 and 3.8 according to Basketball Reference, Granger has 36 minute averages of 13.3, 5.8 and 1.8 and he hasn’t been asked to be the No. 1 perimeter threat like Turner has been for his team.

And that’s the biggest reason why Turner won yesterday — he’s right in the mix for an NBA title now, for the first time ever and he’ll at most be asked to keep things moving on offense and keep wing threats in front of him when Lance Stephenson needs a break or when Paul George has his hands full. Turner is going to be of particular help against teams with multiple threats off the dribble and if there is any trouble keeping up with Indiana’s particular brand of team defense it stands reason that Turner could make up for it on the other end of the court.

So our initial winners are — the Pacers, who gained a superior talent while giving up a more expensive (Granger is on the books for $14 million) asset. Turner is a restricted free agent still on his rookie deal and it should take no more that $8 or 9 million to keep him past this season should the Pacers want him. Can’t overlook Lavoy Allen either in this deal, he’s another playoff-experienced big body who Indy can and will throw at Miami.

Turner and Allen are definite winners, they’ll get to play deep into May. The 76ers are winners as well — we all know what they’re doing here and they didn’t have much hope for the future tied up in Turner and Hawes, its more like Noel and whoever they get in the lottery in June’s draft, plus they’re not tied into Granger past the end of this season, freeing up a lot of cap space for the offseason.

Losers: Granger can be classified as one, but this could be a good chance for him to showcase his skills once more and show that he can be a threatening NBA rotation player. Granger has been a somewhat-threatening go-to guy and he’s faded into relative obscurity as one of the league’s brightest young talents (Paul George) rocketed along side him. If Granger makes the most of these last couple months he’ll get picked up by a contender, not for $14 mil, but he could definitely make some Shane Battier cash, maybe even for Battier’s current team…

Other winners: the Wizards did right by picking up Andre Miller, who doesn’t seem interested in giving country to dumb coaches at this point of his career. Randy Wittman should watch himself, but he did coach Miller before in Cleveland and things should be straight at least for the rest of this season as Miller offers good minutes as John Wall’s understudy and quality journeyman leadership.

At first hearing, I thought this could make the Wiz the favorite for the No. 3 seed in the East but I’m not gonna discount the emerging talent in Toronto or the steely determined grind of the Bulls, who continue to make the Chi proud. Still this makes Washington a much better No. 5 seed.

Like the Nets getting a more explosive guard in Marcus Thornton and letting go of two players in Jason Terry and Reggie Evans who were just there in Brooklyn. Hopefully Thornton is more inspired to play within a system in the BK and boost his play back up to pre-Sacramento levels.

Give props to Charlotte too for doing something to make itself a better eighth seed. Gary Neal and Luke Ridnour will only need to do two things — find empty spots on the court and shoot — those will be the only things they could do should the Bobcats meet up with Miami or Indiana anyway so you might as well pick up guys like that. And of course Neal and Ridnour are winning, they aren’t in Milwaukee anymore, though I’m sure they will miss Giannis Antetokounmpo‘s child-like exuberance for the game.