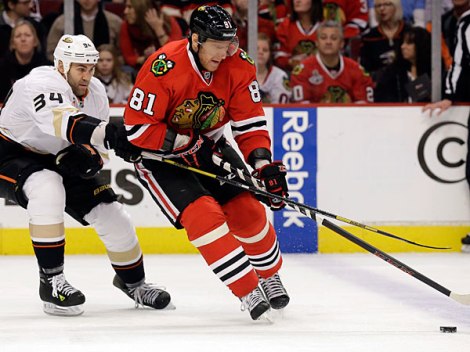 Nam Y. Huh/AP
Marian Hossa, right, controls the puck against the Anaheim Ducks’ Daniel Winnik during the second period of the Hawks’ win over the current Western Conference leaders this past Friday.

Sidney Brown brings his weekly dispatches from the front lines of Blackhawks fandom every week during the hockey season.

Last week I wrote that the week ahead would be an important chapter in the tale regarding the 2013 Chicago Blackhawks’ standing in the Western Conference. The results from the Hawks past week show that they are ready to move forward as contenders.

After sneaking out a point in last Tuesday’s overtime loss to Colorado, the Hawks displayed a previously unseen level dominance against Anaheim and survived in a shootout against Boston in front of an national audience on Sunday. With their 2-0-1 record for the week, the Hawks remain in first place in the Western Conference’s Central Division with 75 points (32-8-11) trailing only Anaheim for the overall lead in the West.

In its two victories, Chicago scored seven goals and set the pace on how they want to play and further cementing the team’s No. 1  spot in the NHL in goals per game (3.5). The penalty kill unit, ranked only 29th in the NHL for the season, managed to stand out this past week. The Hawks’ special team killed off their opponents’ last five opportunities, including three against Boston and two against Anaheim, helping make the difference in a 4-2 win on Friday.

Since his 35th birthday on the 12th of this month, Marian Hossa has turned back the clock with his play on the ice. In his last four games, including Sunday, Hossa has tallied six points including four goals. Hossa has long held a reputation as one of the most dangerous two-way players in the NHL and his recent play has provided fresh evidence of that. For the season, Hossa has 19 goals and 22 assists (41 points), if he can stay healthy I believe that a 40 goal season is possible for Mr. Hossa.

With the Winter Olympic break approaching, eight of the Hawks’ nine games leading up to the break are on the road, including six straight to conclude the season’s first half. The Hawks have done well on the road this season but they’ll face two knowledgeable opponents in Detroit and Minnesota to kick off this stretch. Points are a premium as the Hawks try to keep up with Anaheim and create separation from themselves and St. Louis in the Central Division. It should be noted that the Hawks’ last home game is Sunday against Winnipeg, the next time that Cold Steel On Ice will play in Chicago will be on March 1st versus the Pittsburgh Penguins in Soldier Field.

*To Hawks head coach Joel Quenneville who moved into third place by himself on the all-time regular season coaching wins list (692) after the win against Boston. At this point, I think that it is safe to say that Coach Q is polishing his resume for the Hockey Hall Of Fame when he decides to hang it up.

*To NBC for showing a clip from the 1991 NHL All Star Game, held at the old Chicago Stadium 23 years ago Sunday, an event featuring one of the most memorable renditions of the National Anthem, then sung by the legendary Wayne Messmer.

I remember this moment like it was yesterday.  Even though I wasn’t fully watching hockey back then, I remember catching the game, which aired on NBC, and experiencing that moment brings tears to my eyes even to this day. This country had just entered the Gulf War at that time and that electrifying moment will go down as an important highlight in Chicago sports history.

*To the players and coaches of Calgary (Bob Hartley) and Vancouver (John Tortorella) who helped initiate (and in Tortorella’s case, participate in ) the brawl during Saturday’s game between the two teams. News broke late Monday that Torts received a 15- day suspension and Hartley a fine.

Starting out a game with enforcers on the ice and coaches chasing down opposing players and personnel between periods is absolutely ridiculous. There’s no place for this kind of action anywhere in hockey or in professional sports. Everyone involved needs to apologize to the fans and should be ashamed of themselves for displaying foolish behavior.