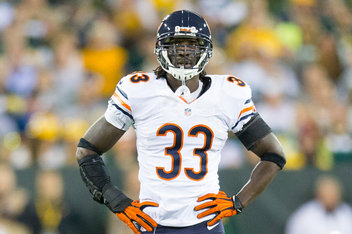 The only developments the Bears have had as of late have been its additions to the “unable to play” list.

This has meant unforeseen opportunities for players like rookie linebackers Jon Bostic and Khaseem Greene to make an impact on defense, on the thinned-out line there have also been chances for a player like Corey Wooten to do some of his most dynamic work as a Bear this season.

Next up for the Calvary is Zack Bowman, a familiar name whose game has to step up in an instant because he’s playing in place of Charles “Peanut” Tillman for the remainder of the year.

Tillman’s injury during Sunday’s painful 21-19 loss to Detroit was the clearest sign that the Bears took a step back coming out of that game. The drama surrounding the all-pro corner’s triceps has even led to speculation that Tillman may have played his last game for Chicago due to his not being signed past this season.

Any and all talk of that conclusion needs to be put to the side, at least until the season capsizes completely. Tillman himself did a good job reflecting questions about his future in Chicago this week, now the questions should be regarding how well can the team possibly defend opposing passing attacks without him.

To Bowman’s credit, he once led the team in interceptions for a season (six in 2009) and the last time we had to pay attention to him he started what would be a bad night for Eli Manning.

In the Baltimore Ravens the Bears have a good opponent to start this transition against. The well-paid Joe Flacco has been mediocre this season (though we all know he makes his paper in January), leading the 17th-ranked passing attack (234 ypg). On top of that, Baltimore’s running game has completely disappeared this year, averaging only 73 yards a game, good for 30th in the league.

The Bears’ porous run defense is ranked 31st in the League (129 ypg) but it may actually get to breathe a little easier this week. And with Ray Rice — as the Ravens’ second most-effective pass option — doing better catching the ball than running it, there should be some help for Bowman on the first and second lines of the defense in containing Air Flacco. Bowman should be able to breathe easy for one more week. After that, though, who knows?

A Bears team without Charles Tillman (The Hub Report)