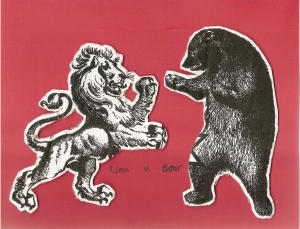 At one point it might have been Bobby Layne or “Night Train” Lane.

Maybe Billy Sims got it at one point, or Herman Moore or Scott Mitchell (just cause).

Barry never got it because, well he was Barry, we were all in awe of him. Say anything else about him and you’re lying.

Taking it to the front office, Matt Millen was definitely worthy for a time, but there’s no way we could have hated him more than Detroiters did already.

Suh? Yeah, for a while he was in the running for the all-time award but he has since been one-upped by the Lions’ current vice chairman.

Ahead in the clubhouse at -10, leading in the ever-heated race for “Most hated member of the Detroit Lions franchise, according to Chicagoans” is none other than Bill Ford Jr.

Ford Jr.’s classification of the Bears’ roster as “thugs” and his weak walk back of the comment as a joke helped paint this genetic lottery winner as a dope more than anything else… for now at least.

You have to hope though, as a sympathizer of the Bears, that this post-Week 4 embarrassment news rattles and re-focuses the team that so noticeably limped out of Ford Field this past Sunday afternoon. The obvious salt in the wound provided by a guy who quite obviously doesn’t know how to win with class may in the end be more of a bitter pill — “here’s what they think about you…” in the words of Ice Cube, circa 1991.

As reported on ESPN.com:

“It was really alive, and it was alive when we played those same bunch of thugs on Monday night, you know, last year,” Ford said, actually referring to the 2011 “Monday Night Football” game between the teams. “When this place gets going, it’s electric. We do have wonderful fans; our fans are amazing.”

Nice that Ford could come within a two-year window of the big Monday night win his team had, I mean they’ve had so many of them. Also nice that the team is getting the collection plate out for Nate. Gotta keep awareness up for those pizza-related injuries, no need for anyone else to get hurt.

Yes, cheap shot, I know, but Ford and his squad are deserving of no better treatment than that, especially giving his incredible slurping of Green Bay, who the Lions face this upcoming weekend:

“Green Bay’s special, and Lambeau Field, there’s a special feeling going into Lambeau,” Ford said. “Always has been. I hate going up there, but when we win this week, it’s going to make it feel a heck of a lot better.”

Corny, corny, corny… and he says that about a team who has kept his franchise 0-for the past 22 years in the state of Wisconsin, not one win since 1991 playing the Packers in either Green Bay or Milwaukee.

Where’s the fire for that foe? The pointed words? Got some slick shit to say because Jonathan Bostic did a late hit but you’re all on the sack of a team that’s dominated you for two decades straight.

The sad thing about this whole morphing of the Bears-Lions rivalry over recent years and its seeming emotional climax this week is that in regards to pure emotional fire in a rivalry, this is what the Bears are left with, a franchise just learning how to follow the law with regularity, a freakin’ franchise that housed this clown for two years, calling them “thugs” just because they’ve bothered to respond to the Lions’ over-the-top defensive extra-curriculars when they’ve been matched up.

Yes, every team and every fan base in the NFC North hates each other on some level, but the historical rivalry feel of the Bears-Packers has nothing on the Bears-Lions, which feeds into the ever-present jealousy and hatred and willing one-upsmanship that defines Chicago-Detroit sports relations — Bulls-Pistons, Hawks-Red Wings, White Sox-Tigers on down — we keep the biggest tabs on each other, think of the best ways to insult each other (for further proof, listen to last week’s D and Davis and make sure you listen this Saturday) and if neither town can go as far as they’d like in a given season, the last thing they would want to see is the other town prosper on any level.

Look at Megatron (yes, that Megatron)’s statements to the Detroit Free Press prior to last weekend’s game:

“It’s easy to have a dislike for them,” the Detroit Lions’ star receiver said. “It’s not hard at all.

“Can’t stand them, one, because they’re filling up the stadium a lot with a lot of Bears fans. So that’s one reason I can’t stand them.”

How many times do we hear from Calvin Johnson in a given season? Not much, and definitely not much in his most recent Bears games — 106 yards combined in two games last season, 44 this past Sunday. I know that dip in average hurts, man, so does not being as popular as you’d like, right, big guy? Sure is hard seeing a comparable number of “Peanut” Tillman paraphernalia in your house to gear celebrating you.

In writing this, though, I’ve come across the idea that all this is a smoke screen. Instead of stories like this popping up when one searches “detroit lions thugs,” we get all this dusting up via Bill Ford Jr. Don’t worry, “detroit lions crime” still does the trick.

We can only hope whatever will be keyed into the search engines of tomorrow after the next time the Bears and Lions square off will be influenced solely by what happens on the field, but if its one thing those Lions know about it is off the field distractions. Good luck in the return game on Nov. 10, fellas.

Matter of fact, good luck this week in Wisconsin, hear they love to have you guys visit. Then again, love only gets you so far in the NFL. It’s the hate that really gets you going.

8 responses to “Hate! Hate! Hate!: What the Bears and Lions Mean to Each Other”