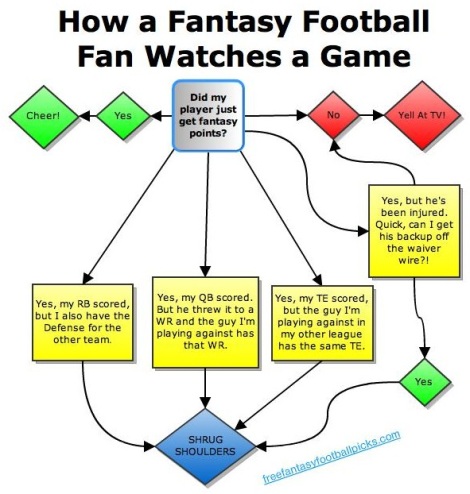 Ed. note — This is a post about doing away with Fantasy Football from one’s life, but not all of us at WARR feel this way. In fact, Regal Radio is putting on its first fantasy football league this year, the WARRFFL (and yes, if you sound it out, it sounds a lot like waffle). Stay with WARR.com for updates on the league, which features Regal personalities and contributors.

Well, sports junkies, it’s that time of the year again.

Millions of people in our great country, if they haven’t started already, will soon gather in small groups at local watering holes, in front of their laptops using Google Hangouts, or drag their sweat pants-wearing, Cheetos-smelling carcasses into their mom’s basements to partake in a particular fantasy. You may think this fantasy involves Miley Cyrus twerking or Beyonce working it like only she can, but apparently the only true universal fantasy these days is fantasy football!

For 10 years I joined in the fantasy world and reveled in it. I have played fantasy baseball, basketball and football. Some years I was great and won championships and in others, I ended seasons wanting to drop kick someone as I came in dead last. This year, I’ve made an important decision and that is to say “Audi 5000” to fantasy sports, with the biggest goodbye coming to fantasy football.

Let me tell you a story as to why I quit playing fantasy football. It’s a beautiful fall Sunday morning in 2012. The air is just cool enough without rattling the bones, the sun is bright — but not too bright–  and the NFL is alive and well for another week.

As I rose out my bed, instead of kissing my wife or brushing my teeth or even washing my ass to open my day, I go right to my iPhone and laptop for the only important information in my mind at the time. You know why I did that? Because I just had to check my damn fantasy football team and beyond that, my biggest issue was being too damn competitive for my own good!

For five or six days leading up to every Sunday, all I would do is watch the waiver wires in my league, proposing deals my grandmother wouldn’t take, just to see if I can get a FOOL to bite on a lop-sided swap so I can beat my annoying coworker head-to-head. Fantasy football surely took over my life!

In no small way, I also lost my love of the sport of football, the games themselves wasn’t enough — I lost my passion as a fan. At one point the only thing that mattered to me is winning a computer game based on the skills of someone else and the draw of the almighty dollar!

No longer was I checking out stats for supreme football knowledge. I had to use all information both old and new in the name of my fantasy “team.”

Who should I start this week?

This guy wants Tom Brady for Adrian Peterson and the Ravens defense?

What, you want to me take out the garbage now? I got to see if this backup tight end came through for me on waivers…

I would even run through my moves in the middle of … well let’s say quality time with my wife, and they weren’t the moves that counted in that situation.

It was clear. I WAS AN ADDICT! A fantasy football junkie!!

I learned that I needed to rediscover the Demonze I once knew before fantasy sports. I wanted to resurrect the Demonze that went to sleep with ESPN on television every night and woke up to it just to get the breakdown of his favorite players and teams.

When it came time to argue the values of pro quarterbacks, my buddies need the guy who could prove a point based on on-field abilities, not potential fantasy points. The fact Peyton Manning is the first quarterback to throw seven touchdowns in one game in 46 years is amazing in and of itself, to hell with how many points he got you in your league!

So I have finally awakened from that dark fantasy I wrapped my life in. You can say I finally took the red Matrix pill. Now, I see the light! No more stressing over lineups, trades and a snake order draft. Pass me a cold one and move those damn kids out of the way, the football game is on!

Follow Demonze on Twitter @demonze1 and listen to him and Ken Davis on Regal Radio’s The D and Davis Show, Saturdays at 11 am on Chicagolandsportsradio.com