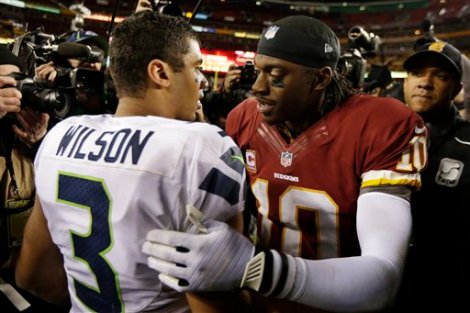 The next wave in the evolution of the black quarterback is officially upon us, complete with all the flash and flare that comes with today’s young athletes.

Growing up in the late 80’s through the early 90’s, I have faint memories of witnessing the pinnacle reached by the legendary Doug Williams in Super Bowl XXII, or the rack of stats put up by Warren Moon across a decade, making him one of the most productive pro quarterbacks of all time.

In spite of their impressions on the game — which included Williams’ MVP for the 1988 Super Bowl and a pair of 4600+ yard passing seasons along with an NFL MVP (1990) for Moon — realizing acceptance as one of the NFL’s elite from media and the masses of fans was something that never materialized with true holding power for either man while they played.

Not long after Williams and Moon came Randall Cunningham, squeezing that trademark high-top fade of his into the old school feather wings Eagles helmet and all of a sudden the game changed. Cunningham birthed the new era of the black quarterback, displaying a rare blend of QB awareness while exhibiting a cannon of an arm, and the ability to tuck and run like a track star.

Fast forward to today and another Eagles quarterback, Mike Vick, now acts as the elder statesmen of the signal-calling brothers and he’s looking to leave his mark on the game soon before he bows out. It’s fitting that Vick will get his first shot to start the 2013 season off right against Robert Griffin III, who himself is also looking to make a big statement on Monday Night Football against Philly after ending last season in a loss to Seattle and its own multi-dimensional budding star at the quarterback position — Russell Wilson.

So much of what I’m looking forward to this NFL season stems from RGIII and Russell Wilson. Like Vick, and the aforementioned Cunningham, both Wilson and RGIII possess the ability to sling the ball and create havoc with their feet. Both quarterbacks also have head coaches who are seen as wildly controversial yet intelligent and offensive minded. Mike Shanahan, in spite of some bumps this off season with RGIII, will look to maximize his ability to guide a drastically improved teams to back to back playoff berths and the same thing is happening with Wilson and coach Pete Carroll. However, despite these similarities, both players will enter their sophomore seasons on two opposite pages.

Wilson will look to continue growing with his young receiving corps, while using that pistol of an arm (remember, he’s a former pitcher) to dissect defenses. With a stout run game, a defensive secondary that goes by the alias “Legion of Doom” and the loudest 12th man in the game coming from the CenturyLink Field stands, Wilson is poised to float under the radar, improve on his fundamentals, put up solid numbers again and possibly end up in a position to reach the Super Bowl.

RGIII comes into this season with a much different tenor of hype surrounding him. For RGIII, this year is about proving the doubters wrong and adapting to a more sustainable, NFL style of play that keeps him on the field while also refining his own style of play.

Unfortunately, there’s no scheduled clash for Griffin and Wilson in this year’s regular season, so one can only hope for a solid run by both and playoff berths for their teams so we can get the early 2014 gift of a return playoff battle between two of the NFL’s brightest young stars.

Catch Sean along with Joe “Champ” Tanksley on The Varsity Show every Thursday on Regal Radio on blogtalkradio.com and follow the show on Twitter @thevarsityshow1, also follow Regal Radio @regalradio1

One response to “Young, Gifted and Calling Signals: RGIII and Russell Wilson”