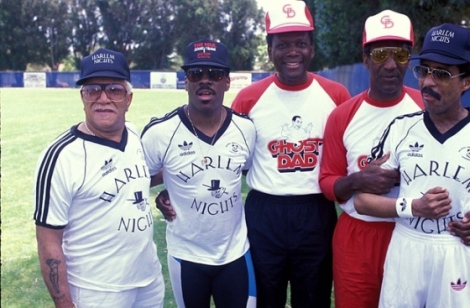 Now it is common knowledge that The Sandlot is the funniest and most enjoyably baseball movie ever, but I think had they tried this group could have put something together that would have gave the latter film a Benny Rodriguez-type run for its money.

As it was, this Murderers Row of pioneering black entertainers — Redd Foxx, Eddie Murphy, Sidney Poitier, Bill Cosby and Richard Prior (if I really had to name any one of them for you, you can stop reading this blog right now) — was merely advertising their respective so-so late 80’s projects (though, I know, a lot of black folks look back on Harlem Nights fondly) in what I guess was a cast and crew softball rec-league like showdown.

I’ve seen this pic around the net a couple times and no one really has the story behind it but just knowing the men in it and everything they’ve brought to all our lives makes it one of the coolest pictures the internet can unearth. It’s also great to think about how their careers have all intersected and the back stories they all have with one another, likely starting with Poitier, Cosby and Prior all appearing in Uptown Saturday Night some 15 years earlier.

Most interesting to me is the Cosby/Pryor dynamic. If there were any Playboy bunnies at this game I would give 2-1 odds that Cos was doing one of those “look at that broad ova there”-type grabs at Rich.

Anyone who saw Eddie Murphy’s Raw can also attest to the devil/angel type of dynamic the two held over Murph when he was running things.

Also making this pic somewhat timely, which I’ll try to do with these things, the Cos is returning with his first stand up special in 30 years, which is airing this fall on Comedy Central.

2 responses to “Regal Image of the Day: Laughing Legends of the Diamond”