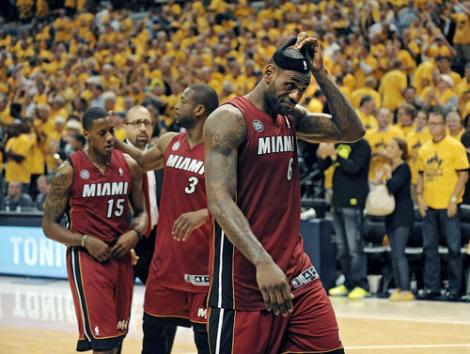 Michael Laughlin/South Florida Sun Sentinel
The ultimate show of frustration: LeBron James takes off his headband while walking off the court after the Heat lost Game 6 of the Eastern Conference Finals to the Indiana Pacers Saturday.

So, who will save the Miami Heat tonight in Game 7?

Before “LeBron James” comes out of your mouth know that he’s not an acceptable answer in this equation. Essentially, Lebron IS the Heat at this point, he can’t provide the little bit extra that puts them over the top because if not for him they’d be already tumbling down the mountain — at best he’s playing a 2 on 1 game out there against Roy Hibbert and Paul George, at worst he’s being frustrated on the perimeter by the Pacers’ quick and aggressive guards and being stood up and ran off the court once he tries to control the paint.

Still, his numbers have been amazing this series, he scored 29 points with seven rebounds, six assists, two steals and a block on Saturday but it wasn’t enough. If you think about it, in spite of his 28.5 points a game this series (along with 7.2 rebounds and 5.5 assists), James and the Heat are really a Udonis Haslem awakening in Game 5 (and arguably a Roy Hibbert benching in Game 1) away from being upset. Yup, we’re even closer to an Indiana/San Antonio NBA Finals than this developing of a Game 7 would have you to believe.

If LeBron being in a shoulder-carrying position rife with playoff uncertainty sounds familiar, it should, he himself admitted as much earlier this series, saying that he had to go back to his “Cleveland days” after pulling the Heat forward in Game 5, which Miami won by 11 points (90-79)– Bron contributed to at least 28 points himself in his incredible third quarter in that game.

As big as anything in that game James did was Haslem’s 8-9 shooting for 16 points in that game (matching an 8-9 performance for 17 in Game 3, Miami’s only clear instance of out-performing Indiana this series). We’re apparently resigned ourselves to accepting Miami’s regressing from a Big 3-led team to a Big 1 (at least temporarily), seeing as neither Wade or Bosh has cracked 20 points in the series and neither one has provided a stretch where they carried the team in Bron’s stead, but could it be that Haslem is the key to the Heat surviving?

We already know he has the only tough and level-headed interior game (level-headed being an exclusion for the Birdman) to match Indiana’s bigs, but if he can give LeBron some room to operate in the middle of the floor and in the interior by drawing the Pacers’ post players to guard his baseline mid-range offerings then we should see the Heat scratch out its second straight thriller in the Eastern Conference Finals.

It’s funny how last year LeBron taking over completely was the only way for Miami to go as it faced elimination, but unless he puts up 45, 15 and 5 again tonight then the Heat are in some trouble.

No Mo’ No Homo

So apparently, Roy Hibbert mistook his press conference after Game 6 for a Cam’ron mixtape skit and started flying outdated slang at everyone in the place. That’s on top of adding an “muthaf*&ker” in that conference so those ig’nant reporters could hear him (oh, when Lauren Hill was good…).

Hibbert was feeling himself extra hard (pause…) after Game 6 and had good reason to with the 24 and 11 he put up and the whole pushing the prohibitive favorites in the League to a deciding seventh game thing. You can see Hibbert suffering from diarrhea of the mouth from a mile away in that setting given that he hasn’t been in such a situation many times and that he is at a somewhat victorious point of his career already, having been discounted as a true power in the game for much of his pro career even leading up to this series (see: overtime in Game 1).

Still, its hard to overlook how stupid he was for letting the “no homo” slip in that occasion, mainly because the shit is stupid to begin with– always has been. Regal Radio contributor David Evans told me Friday of a hilarisad instance where a young boy had to let the “no homo” fly after giving him an innocuous compliment about something or other, leading the boy to believe Dave was “cocky.” At a certain point our young, black culture has let too many meaningful things fall by the waste side while lifting up BS to the highest degree of concern, men complimenting men being one of them… men being seen as compromising any sense of masculine authority being another (although it’s the wild west out here in these streets regarding where your belt line sits on your thighs).

To make it worse, Hibbert knows better, as shown in the first SI.com link embedded above, he has intelligent thoughts regarding gays in society today and their potential place in sports, but again he was just a little too comfortable and too cocky (pause…) in the moment and he’s been getting spanked publicly for it and soon will come some hard discipline from Commissioner Stern (uhh… I’ll let that slide).

We all just got to do better — better than Hibbert’s wack apology too by the way, if no homo is “not appropriate in any setting, private or public…” then why did we have to go through all this? — especially in front of pools of microphones. I know the whole situation looks suspect, that pile of mics pointing up all phallic and stuff, but be secure in yourself and who you really want to bone after putting up a double-double. If you got stretched out in the paint by a couple rough customers from Miami, remember Roy, it eventually gets better.

Though the no homo has never been my thing, there was one classic moment where the passive-aggressive gay bashing of mid-aughts New York rap culture peeked brilliantly into the sporting landscape, courtesy of everyone’s favorite hip-hop announcing siphon (not cypher), Gus Johnson.